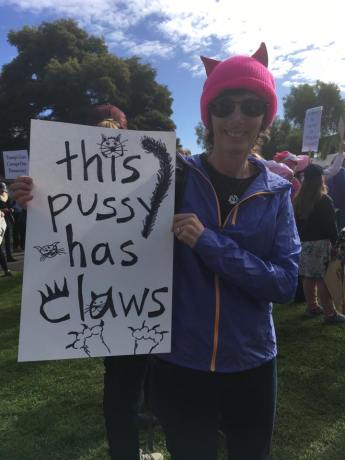 Who knew what to expect?  I and the people I know and love detest Trump and abhorred the prospect of his actually taking power.  I was happy and relieved someone had called for a massive Women’s March in DC.  Then I was happy to hear that there would be local sister  marches.  I didn’t know who had called for the Women’s March.  I had no idea how much conflict was going on behind the scenes. I was in trust mode.  Maybe in overwhelm mode too.  So much to try to take in, comprehend, understand.  Someone was doing it!  Yay! I thought.

Some of my friends  — Eileen, Karen, Joelie — were definitely going to the DC march.  I WANTED to go too, but given my Raynaud’s syndrome (and the possibility of freezing weather in DC) I opted to stay home and march here.  Uncertain as to the turnout here, there, everywhere.  Still, hopeful.

The Tuesday before the Marches, my women’s group gathered at my house to make protest signs.  I was so busy making signs I forgot to take pictures, but here’s a pictures of Lucy’s sign (above). 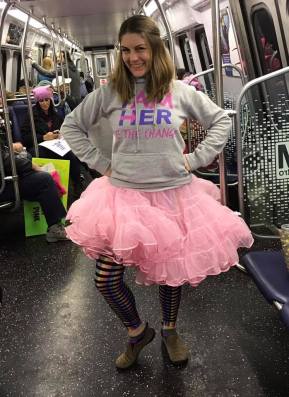 My friend Jessica in New York City was also ready!

And my friends Cathy, Chihiro, Kittisaro, and Thanissara at the Oakland March!

I didn’t know it, but my sister in Oak View also had a protest sign making party at her house for the Ventura Women’s March.  Sisters can be such a gift.  Mine is.

Friday, Inauguration Day, was such a sad day.  I was mourning, grieving the whole day.  Other people spoke of this feeling too.  I went to the Purple banner Action on the Golden Gate Bridge that day with Fern, Andrea, baby Gigi, Megan, and baby Harvey.  The rain stopped for the action.  It was a beautiful moment — happiness and a feeling of common purpose abounded.

I didn’t watch any of the inauguration on TV or online or listen to it on the radio.  Still, it was like a funeral instead of a happy occasion.  In the evening, watching a video online of

Michelle and Barack Obama get into that helicopter was totally heart-breaking.

Telling were these images of Michelle at the Inauguration itself.

And… there was definitely a gathering energy, but who knew what would come of it on the day after the Inauguration? 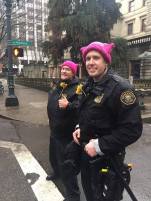 The results were positively stunning.  Around the world millions of women, men, and children marched.  The events were overwhelmingly peaceful, happy, kind, and focused.  Some police officers donned pink pussy hats as well.  The guidelines were that it wasn’t an anti-Trump march but a pro- human rights March.  But the signs said it all.  Though there were a vast variety of clever, funny, meaningful signs, the overwhelming message was Anti-Trump.  Predator-in-Chief. Not our President. 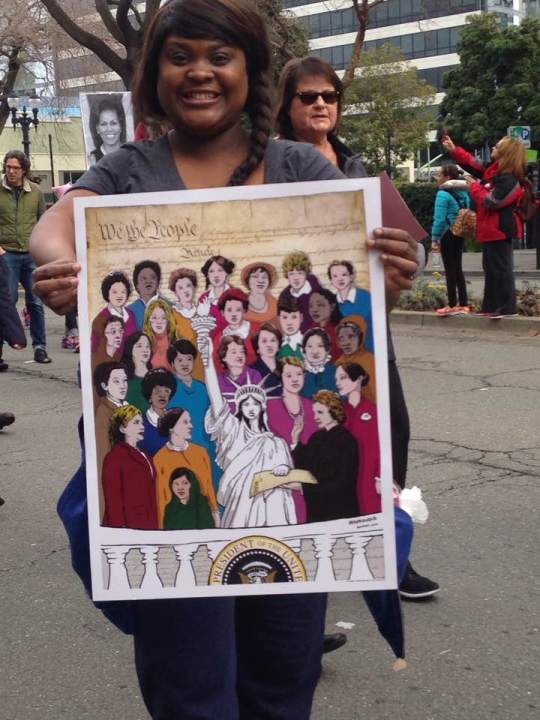 The photos and videos from the events were deeply moving, first of all that that many people came together to speak up and speak out.  Second, that it was organized by Women!!!

The energy created by these events was enormous.  The question now becomes how to harness that energy to effect positive change?

Lots of interesting articles are coming out to reflect on this question.  Thank goodness.  It’s hard to know how to move forward in this new reality, the one we really don’t want to normalize, but it’s also difficult to live on high alert 24/7.  Grocery shopping, laundry, daily reality is still happening and we must participate in that too. As well as finding ways to enjoy and appreciate the good in life. Also to rest and replenish ourselves and our energies. How to focus?  Move toward greater understanding and kindness with each other?  Greater focus in fighting against these terribly regressive Trump/Republican moves to dismantle so much that has been good about government?

Rather than repeat all the excellent suggestions of others, I’m going to give some links for some excellent reads. (see below)

I had adopted a motto a couple of months ago that I’ve been trying to live by.  Resist & Don’t Let Them Steal Your Joy.   It’s what I chose to write on my protest sign. Last night, however I heard the great choreographer and wise person Bill T. Jones speaking at the SF Jewish Community Center.  The focus of his talk was about the current situation, and how important it is to understand how powerful we are and that we act in that way — courageously. He said a number of interesting things, but the thing that most stuck with me is this.  He said that he’s heard the word Resist being used a lot, but that he doesn’t like the word that much.  He said, it’s like a contraction, and then, because he is a dancer in his most central being, he moved his aging, but still tall, strong, elegant body into a posture of tension and contraction.  Then he straightened it out and stood tall and open, expansive, and indicated that this would be a better stance to come from.

And it struck me!  Ah, yes!  This had been exactly my dis-comfort with the word, though I hadn’t been able to get clear on it until he said it and embodied it.  After his talk, I couldn’t stop thinking about how I could re-work my motto. Have it say what I really want it to.  Eventually I came up with Energize, Unite, Engage  & Don’t Let Them Steal Your Joy.

How can we take that energy and start collaborating?  Whether it’s two people?  Ten? One hundred?  The Democratic Party?  How do we treat each other?  Speak? Listen? How do we create trust and unity rather than division and mis-trust?

From there we can decide what our engagement will be.  There will be many fronts.  We can’t each do them all.  Which area of engagement calls you?

And lastly, don’t forget joy, which also has to do with (and brings us full circle to) what energizes you.

Let’s keep reading, thinking, talking with each other, with everyone, and figure this out. It WILL be messy.  Let’s be kind to each other.  Let’s allow mistakes and learn from them. We can fight back! We can do this!

“Without a path from protest to power, the Women’s March will end up like Occupy”

“After the marches, what’s next for those who want to act?”

How to have Better Political Conversations — a Ted Talk