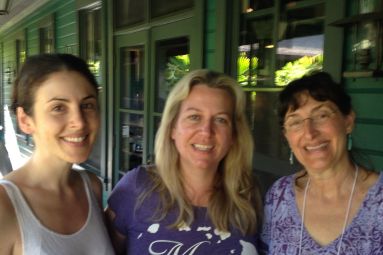 March, 2015. By the end of the week-long workshop in Maui with Cheryl Strayed and sixty-some other women writers, I felt inspired. People had a variety of writing projects in the works or planned.  I decided to start writing a blog.  Sometimes you just gotta  dive in, get yourself wet (maybe like a baptism) before perfecting the dive later on.

What would I write? And where? Who was my audience?  I didn’t know. I decided on a name that was as accurate as I could get.  “As I am…”

I’d heard it’s important  for writers to read other writers. I’m a slow reader, but I try.

I find myself drawn to memoirs.  It’s not that I don’t like novels.  Like Anthony Doerr’s “All the Light We Cannot See” or J.K. Rowling’s “Harry Potter”. I adore these books.  But mostly it’s memoirs that draw me. Memoirs about regular people, except they are also writers, a particular breed I have come to know, trust, and love.

At the same time Krista Tippett came into my life with enlivening conversations at On Being. Also the young Courtney E. Martin with her wise-beyond-her-years essays, and Maria Popova with her brilliant “BrainPickings”.  Rebecca Solnit with her unyielding curiosity, clarity, and fierce kindness. Cheryl Strayed too with “Wild” and “Tiny Beautiful Things” and Lidia Yuknavitch with “Chronology of Water”.  And new writer friends I’ve met on writing retreats the last couple of years — Julie Barton with “Dog Medicine” and Karen Lynch with “Good Cop, Bad Daughter”.

And women writers you haven’t heard of yet but will someday.  Who are awesome already, without fame.

I belatedly discovered Anne Lamott and began understanding the value of humor scattered in the darkness. I was listening to Elizabeth Gilbert (of “Eat, Pray, Love” fame) being interviewed by Krista Tippett, and now am listening to Elizabeth’s audio book “Big Magic: Creative Living Beyond Fear”.  I listen as I drive.  No kind of traffic situation bothers me in this state. I am accompanied, encouraged, and loved for even the parts of me I have not yet discovered & reclaimed. How often does one feel this way while driving? Yes, yes, yes I nod back to her voice, smiling at my friend Elizabeth while drivers do the craziest things and it doesn’t bother me one bit.

The other night I ran into an old friend I haven’t seen much in the last few years.  He’s a dashingly handsome, smart, successful lawyer and a generous person who does a lot of good work in the world. He asked if I was still doing my art work.  I said not so much lately, mostly I’ve been writing.  He asked what. A blog, I said. Before I could say more, he’d already moved on to tell me I HAVE TO read T.C. Boyle to learn about metaphors.  I said I’d check him out, but  what I’m really enjoying reading right now are memoirs.  His response was body language, instantaneous dismissal.  He pursued his line of thought;  I was being mansplained.  My “ex-“ standing nearby tried to lend support, telling him of the 65 essays I’ve posted in a year and a half of blogging. Zero response.

It was a classic moment.  I’d been there before — a thousand times. He didn’t see me. He didn’t get me.  I was disappearing before my very own eyes.  I made the quickest escape possible.  It’s good to avoid people who make you disappear.  Who mansplain. Who truly aren’t interested in you or your work.

In the memoirs I read and interviews I listen to,  I’ve learned I can only be creative in my own way, on my own terms, expressing that which I alone on this earth have in me to express this particular way.  I’m learning to let go of comparing mind. It’s MY creative work to do, nothing to do with someone else’s agenda or judgements. If there are similar stories or styles, so much the better.  If not, that’s fine too.

Growing up in Phoenix I was the only Jewish girl at my school in an anti-Semitic community. I can’t tell you how lonely that was. I was gob-smacked when, as a teenager, I first saw a photograph of young Israeli girls.  Oh!  That’s who I looked like. That’s how I feel being around women writers.  Minorities and targeted groups (gays, females, etc) need to get mirrored by others like ourselves.

I need to allow experiments, mistakes, and weirdness.  I need to hold contradiction and paradox, like the question posed by Marge Piercy on being of use (which admittedly I love to be) versus, for instance, being creative, whether or not it’s useful (more challenging for me).

Going through this process of being a blog writer, I know something I didn’t know before about being creative.  I know its value in my life. I know the deep connectedness I feel to myself when writing and to other writers, especially bloggers and memoirists.  Because maybe our time has come to be heard and the truths that are finally getting told will be of value in ways we don’t yet know. They already are for me.

I want to encourage others, as I have been encouraged because I have gained so much from stories of bravery and kindness and the overcoming of odds, great and small, especially one’s own self-judge and storyteller of I can’t or maybe I shouldn’t or I’m too scared and most especially what will others think?

I want to inspire others not because I am famous and powerful, but because I am honest and at times a kind of funny that gives a little perspective.  I aspire to be half as funny as Ann Lamott so I can take my self less seriously, while being totally serious.  Holding paradox.

Maybe I’ll inspire you because I am here. Writing.  Despite various challenges, I have not given up.  I have found the process of writing a far more effective anti-depressant than any other medicine or therapies I’ve tried. Generally speaking, when I write I’m happier.

Writing helps me see my way through to the truth of things and also discern which reality I want to trust my well-being to.  For instance. A mansplainer?  or a fellow writer?  Guess… which.

Here’s a few recent ones that have inspired me.

An excellent blogpost by a fellow writer/Facebook friend, and artist Elle Brooks (and don’t miss the great video clip in her blogpost from the Sopranos about the inner critic).

Lidia Yuknavitch on being weird.

Elizabeth Gilbert with Krista Tippett, on Choosing Curiosity Over Fear.

So many riches. I am SO grateful.

3 thoughts on “On writing.”