The Buddha said the way to happiness is the middle path — not the extreme (and sometimes grotesque) body-denying practices of the wandering ascetic sadhus attempting to counter-intuitively enhance their well-being and siddhis.  Nor would self-indulgence —an endless acquisition of things — work.  In other words, the Buddha taught neither aversion nor greed would bring happiness.  Not then, not now.

The Buddha said the middle path would. Moderation. Skillful speech and action. Qualities of kindness, compassion, equanimity, etc.  He didn’t proclaim himself a god, or ask for belief in anything.  He said “See for yourself“. He laid out his teachings in endless discourses to his disciples, who eventually wrote them down in the form of lists.  The four noble truths, the eight-fold noble path, the four brahma-viharas, etc.  He also said “everything is Impermanent.”  So there’s that.

Marie Kondo laid out her path to happiness in her book “the life-changing magic of tidying up”. A truly great title. Full of hope, and nostalgia for a term like “tidying up”. A title so much catchier than “The Middle Length Discourses of the Buddha”.  Get rid of your too muchness, the clutter of your home and life by going through all your stuff and only keeping that which gives joy.  Who doesn’t want less stuff and more joy?

I bought it, and the book. With Anna’s help, I did well de-cluttering my clothes.  Book-loving friends were appalled at how many books I gave away. I promised myself I’d go to the library — thereby saving money which could be put to better use and not re-fill all those now blessedly sparsely-populated shelves.  Kondo’s  “joy-seeking” system started off great, then started breaking down when it came to “miscellaneous objects” and “papers” when joy became elusive in the process.  Still I persevered.

I love this painting by Creativity Explored artist Camille Holvoet

Marie promised once only-the-socks-I-actually-wear were neatly folded in the drawer, I would “never need to de-clutter that drawer again”.

The Buddha’s instructions were less specific and therefore not easily measured, except in degrees of suffering, which is kind of the way my grandma Anna Katz measured ingredients in her cooking and baking, subjectively, that is — a little, a lot.  Also, you can cover up a multitude of sins by sitting still and appearing to be calm and holy.  It’s sort of  “fake it ’til you make it”, because the mind in meditative body posture is often anything but peaceful, but sometimes eventually calms down… for awhile.  Also, at least you’re not doing other kinds of harm while you’re sitting there.  So that’s a benefit to society right there.

The Buddha’s middle path seems at once a high wire-tight rope act of the most challenging, when-I-am-ever-going-to-learn? variety and other times a landscape so gracious and easeful I think enlightenment can’t be that far off.  So, I’m not sure.  Is the problem the Buddha’s prescription, or me?

With Marie, there’s no controversy.  Her guarantee is see-able to the naked eye and did not pan out.  Her promise of a permanent fix flies smack dab up against the Buddha’s promise of Impermanence, so maybe I should have known. Also, the fact that she is obsessed with de-cluttering is only momentarily contagious. 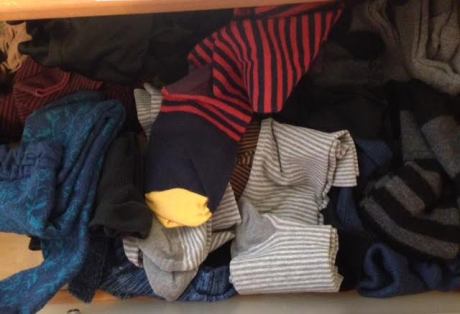 The sock drawer is a disaster, with only archeological remnants of an earlier more highly organized drawer society of only two years ago, though it looks much more ancient.  The socks are clean, but in severe un-Kondo-like disarray.

That kitchen drawer almost empty two years ago now looks like this. 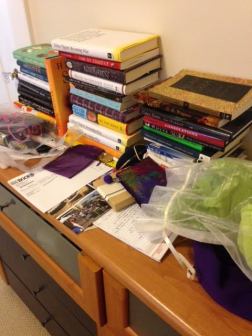 New piles of books I bought!!! have piled up on my dresser, while my reading has slowed down to a trickle, like a creek bed in drought.

Marie has a new book called “spark joy: an illustrated master class on the art of organizing and tidying up”. I will not buy it! The title annoys me.  “master class”? The sub-title says it’s a companion book to her NY Times best seller.  Really? Her first book needs a companion? I’ll give a lot of things a try, but… really?

It has sections titled “pack drawers like a Bento box” and “fold clothes like origami”. There are hand-drawn illustrations, cute and… ridiculous.  Here’s the coup de grace sentence. “As a general rule, my clients fold their own clothes, but I do help if there’s a huge amount.”    Oy! The folding services do not come with the book.

Ok…tantrum, tantrum,  breathing, breathing… I’ve got a major de-cluttering project ahead of me, so I’m a little anxious.  I want to have a calm, de-cluttered space (internal and external) for a small family wedding in my home and backyard at the beginning of October.  I’m no longer delusional about the permanence of this state. Right now I’ll settle for October calm.  There are practices.  Joyfully or not, breathing in and breathing out, I will be doing a major de-cluttering practice for the month of September.  May the gods of “not wanting” and “moderation” be with me.  And if I could ask for just a wee bit more, may there be joy.

7 thoughts on “Wanting, not wanting…”