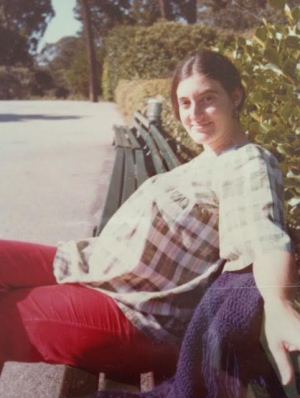 Maybe it was because I never got married. Hmmm?  That’s not exactly true.  I did. Get married, in a fashion. In “bad fashion” to be exact.  Bright orange corduroy maternity pants. Green plaid flannel maternity top. Blue adidas with white stripes.  I can laugh now about my “wedding” outfit, my wedding day, though to be honest, there’s some sadness too.

Being revolutionaries. we thought we didn’t need the state to sanction our love.  I was six months pregnant. I don’t know, maybe it was pregnancy hormones? I worried, what if he got arrested? Would I be allowed to visit him in prison if I wasn’t his wife?  For his part, his father had recently married a wonderful woman who had had no children. She had lived in Africa and been friends with W.E.B Du Bois. His father and she had had a “Red Guard” wedding in China where they met.  She expressed to him she’d like to be legally the grandmother of this soon-to-be-born child. These two storylines — the potential prison visit and the grandmother — became the rationale behind our action.  We decided to go to City Hall on May 19th (an auspicious date we thought — the birthdays of Malcolm X and Ho Chi Minh, the death-in-battle-day of Jose Marti). We didn’t tell anyone ahead of time in case we changed our minds.  As we parked on Van Ness and before getting out of our tiny blue Datsun, my soon-to-be husband said, perhaps in an attempt at levity,“Let’s just pretend we’re going to pay a parking ticket, ok?”.  Ka-boom. “Ok” I said.  Our witnesses were strangers who happened to be in the courtroom that day.

It wasn’t that we weren’t in love. We were.  It was more to do with the times. (And, ok, the fact that I had not yet found my own voice, which took many years).  A lot of people still got married in churches and white dresses and a sense of celebration. Just no one we knew.

The people we knew were not bound by traditions or society’s rules and regulations.  Quite the opposite; they/we were breaking them. The people we knew were bohemians and radicals. The people we knew weren’t getting married. At least not in white dresses. Well, maybe some of them had been married in a traditional way, once.  But now, (then) a few years later, after a number of civil rights and anti-war demonstrations, police batons, arrests, endless discussions of the merits of “solidarity” work versus Party or pre-party formations, Trotsky versus Stalin, Krupskaya, Emma Goldman, eventually women’s liberation and the slogan “Smash monogamy”, communal evenings of smoking marijuana ending in the kitchen for “munchies” and eventually in someone or another’s bed for coziness and warmth, the simulation of intimacy, and who knew, perhaps a surprise experience of love?  After all that… wedding celebrations!? How bourgeois!  How petit bourgeois!  How Not! revolutionary! What a silly romantic notion!  What a silly romantic girl, lacking in dialectal materialism!

If love (sex) was free, and monogamy was going to be smashed anyway, why bother with marriage? 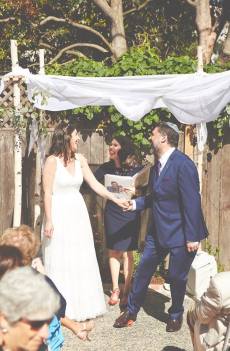 It’s been five days now and I’m still feeling rocked by the impact of my daughter’s wedding.  The  open declaration of love.   Forty people gathered to bear witness and celebrate.   Outside in the full light of day. A gloriously sunny day, as if nature was smiling too.  Bride in white and beautiful. Groom dashingly handsome and happy. Her sister/maid of honor.  His brother/best man. Family. Friends.  A chuppah.  Bountiful food that reflected the mixed-ness of the marriage — east & west coasts, deli & vegan.  So much good will and joyfulness.
People who were strangers to each other at the beginning of the weekend (his side/her side) shared three days of celebration because these two — Jay and Anna — are “warriors” for love and without one ounce of reservation, shyness, or doubt, declared openly their love for each other and their commitment to go forward together.

The other day I caught a glimpse, a shiny and sparkli 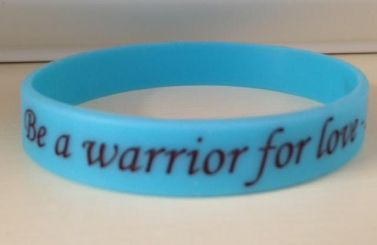 ng radiance, something beautiful and wondrous.   It was how Anna and Jay — out loud and proud — “owned” their deepest feelings and intentions in front of everyone , and how the community — the families and friends — held that love in all its revelation and shared it.  It was so joyous!

Which brings me to Mudita (pronounced moo-dee-tah).  Mudita means sympathetic joy.  It means being happy for someone else’s happiness.  In our society we often feel competitive with others, as if there’s not enough happiness to go around.  Maybe it’s not just our society.  Maybe humans have always been like this. (Yes, actually, why else would the Buddha have taught the practice of Mudita 2500 years ago?)

Experiencing happiness for another’s happiness is a great way to expand one’s own sense of well-being.  Sharing happiness is a wonderful basis for coming together in community and developing further community.  This is my new experience of a wedding. 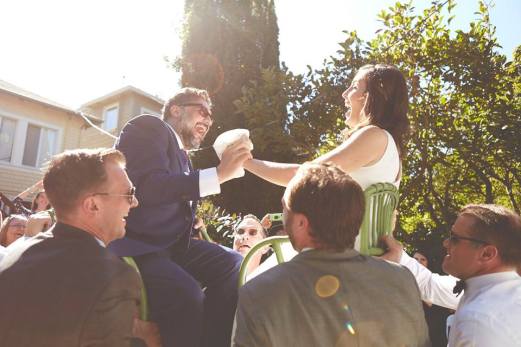 In addition to my beloved daughter, I now have a most wonderful son-in-law. I am unabashedly happy about this. I hope my happiness creates ripples of happiness for others. I never had a son-in-law before. I’m looking forward to the adventure, and the expanded community of family and friends I feel connected to because of that most special day. The wedding.

12 thoughts on “Re-thinking wedding days…or… to quote Bob Dylan – “Ah, but I was so much older then; I’m younger than that now.””