Gifted me a fistful — neatly folded — of Clorox bleach wipes

I wiped down the tray latch, the tray — front, back, and sides,

The seatbelt buckle, and armrests

She says her pants are ok, no need for new ones 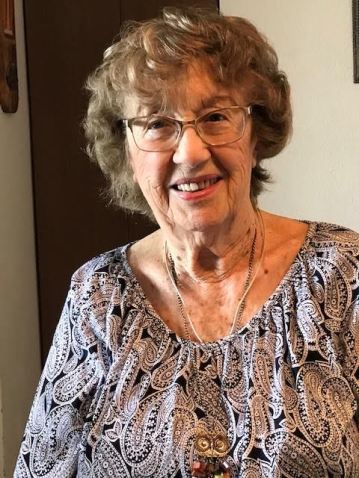 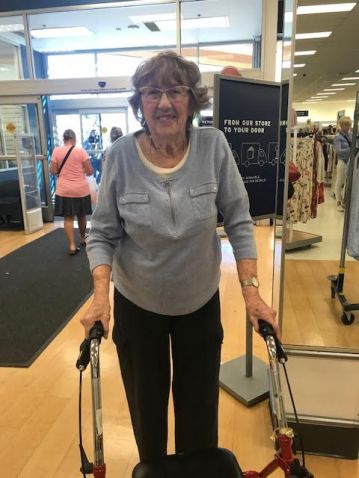 Mom in one of her new tops, Mom at Marshall’s, Mom and Maria @ Bananagram

In bananagram; she still wins.

In talking and story-telling; it’s frustrating for her, also humbling

That when you’re one hundred, you don’t need a terminal diagnosis

Her good friend Mardell, 2 years younger than her died a few weeks ago

Unexpectedly, though again, when you’re 98, you  don’t need a terminal diagnosis

Mardell was smart and nice and serious, less given to gossip

She’d once been a colonel I think in the military

Being an anti-militarist myself, I never held that against her.

I never knew her before she was ninety.

People’s lives are complicated; Mardell and I liked each other.

Mom’s already lost so many people, but losing Mardell was a hard one

During our visit, Mom had a persistent cough, not pneumonia or anything,

At the dining hall table with Mom’s friends last night

everyone was  talking about what if they were quarantined in their rooms.

It would be so devastating.

It’s not contagious, not that I didn’t wince when she didn’t cover her mouth

She tried, but sometimes I guess the cough just felt like an out breath to her.

On the plane today flying back to San Francisco

I alternated “ugh” with feelings of compassion for them, for me, for all of us

I wondered who on the plane voted for Trump.  This guy? That one? Her?

I feel sad for our country.  So lost.

now partially replaced with listening to and interpreting coughs.

A cold? an allergy? bronchitis? pneumonia? a simple throat-clearing maneuver?

until we’re all clear or all dead, because

the Potus doesn’t want the numbers to go up.

ps… the  photo of me above is the current state of my chin after a harrowing face plant on the sidewalk a week ago.  The bruise is starting to change from deep purple to multi-colored.

*Papancea is a Pali word from the Buddha’s time which means “proliferative thinking”, where one thought leads to the next and before you know it, and without your knowing it, your mind has travelled far and wide, usually in worry and judgements.

Covfefe-19 — I know people have various nicknames for our POTUS.  Many have vowed not to even say or write his actual name.  Sometimes when people say he acts like a child or a baby, I think, hey that’s not fair to the child or baby.  Or if they say he’s a pig, I think also, hey pigs are good.  During the recent hullabaloo and ridiculously handled potential pandemic with Covid-19, I decided that I had found my nickname for him.  From now on he’s Covfefe-19 to me.  Highly contagious, highly dangerous, life-threatening to vulnerable populations.

8 thoughts on “Papancea* on a Plane”