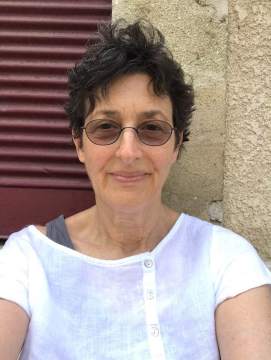 7am. San Francisco time (nine hours later here..) and Lisa’s in surgery right now for a kidney transplant… after, what is it? two or three years of four days a week home hemodialysis.  I just spoke with Lincoln after seeing Lisa’s “6:00am Surgery” post on Facebook. If I were there I would be at the hospital with Lisa and Lincoln right now.

Instead, I am here in Totnes, England, in The Curator Cafe on the main square, people watching, contemplating, and writing.

Yesterday Jenny and I took a river cruise down the Dart River to Dartmouth where the river lets into the sea.  It was rainy and grey, sub-optimal weather you could say, but the beauty was still visible and I was still able to take it in.

Today, Jenny took off for her school — Schumacher college, where she is studying horticulture and permaculture.

With Jenny’s guidance I found my way on the country road to, first the Texaco gas station, then to the Dartington shops.  You might think it strange that Jenny suggested a stop at the local gas station, but she said an Indian family runs a small store attached to it that has wonderful healthy food, both prepared Indian food, curries and such, as well as fresh produce etc.

At the store I bought an aloe vera drink and a vegan gluten free chocolate bar.  I also met Simon.

Since I’ve been here, I’ve met a number of people, mostly cabbies, but also two couples — Michael and Anne on the train from the airport my first day here, and another couple — Roger and Janice — on the river boat yesterday —  to whom I’ve posed the question, So what do you think about Brexit? Mostly I’ve gotten a very loud and clear response from each person, either vociferously pro-Brexit, or just as equally impassioned against it.  Roger was the most vociferously pro-Brexit.  He also loves Trump and thinks all our American problems are due to “that awful Clinton woman” and the Democrats, he threw in for good measure.  He also told me that Jeremy Corbyn is a “commie”.

Trust me, I have no need to meddle in British politics.  I know better.  But I do have a thing or two to say about Trump. After all, America is my country, and way more not-my-president than he is not-theirs. Yes, I have a thing or two or 500 to say about this, our wannabe dictator. Roger was as timid a man as there comes. Shy, and physically small, and I would say, only knowing him the length of the river cruise (about one hour), extremely insecure. Though he’s about sixty-ish, you can totally see the wounded little boy in him.  He literally cowered when one aggressive British woman on the boat almost attacked Jenny for wanting one of the doors to the inside boat cabin open for fresh air.  Jenny hadn’t opened it; we found it that way.  And also the cabin smelled of petrol or diesel fuel, so despite the cold and rain, it was good to get some fresh air in the cabin.  So when the woman peremptorily closed the door despite the fact that Jenny was obviously standing right there, enjoying the fresh air, Roger was clearly frightened when Jenny tried to negotiate with the bully-ish woman.

I tried to reason with Roger about Trump. I teased him in a friendly way.  His wife, Janice seemed a tiny bit open, but not Roger; he didn’t want to hear it. Trump and Brexit belonged to him and he’d die before giving them up. Still we parted on friendly terms though I’m pretty sure he decided I was a “commie” too.  Me and Jeremy Corbyn!  Et voila!

Today I found Simon at the Texaco store.  He was not for Brexit, but he also wasn’t steamed up against it, at least in demeanor.  He wanted to discuss it and we did.  He said, 50% of the British people had vote on each side  (for and against) to consider the question of Brexit, that they hadn’t voted TO exit.  He said there’d needed to be more discussion, which didn’t happen.  He agreed with me big-time about Trump.  We shook hands at the end of our 15 minute conversation, for-sure friends.

After the Texaco “health food” store, I went to check out the little hamlet of “Dartington shops”, bought a handful of birthday cards (packable) in one little gift store, then, with some kind help from the locals, found my way to the bus stop for Totnes on the other side of the roundabout. Totnes was 2 km away, walking distance for some, but not me.

At the bus stop I met Sheila Guy. (not sure the spelling of her name; that’s what it sounded like).  We didn’t talk Brexit.  Instead she told me about her 97 year old husband who had to go live in a nursing home last year, not too far from where we were, but  hard for her to get to by bus.  She said every time she goes to visit him, he begs to come home.  He doesn’t have dementia; just can’t walk anymore. And he used to be an athlete.  It was so sad, and clearly Sheila feels bad about it, but doesn’t feel able to bring him home.

She asked about the Aloe Vera juice I was drinking and I told her I’d gotten it at the Texaco shop across the street.  She told me that her husband’s parents had built the garage in the 1930s, that then, there’d been a single petrol pump in front and that the only gas they had to sell was Russian-supplied benzene.  Another old British gentleman waiting for the bus smiled and confirmed her memory of what had been there.  She said, and again he confirmed, that the fuel had cost one shilling, thruppence (3 pence) a gallon. They both laughed and shook their heads at the ridiculous discrepancy between then and now.

Sheila said the Americans had taken over the garage during WWII and installed the Texaco station there.  She pointed to the green lawn next to the bus stop and said, There the Americans paved over it and put a deep pond next to it so they could practice with their “ducks”, land-water vehicles that were used in the war.

Eventually the bus came and Sheila suggested I sit next to her so that I’d know when to get off — the same stop as hers — central Totnes. 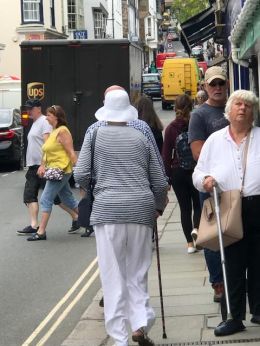 Sheila (in the white hat and white pants and cane) walking up  the High Street in Totnes (their “Main Street”). I don’t know why I felt shy about asking Sheila and Simon about taking their pictures… 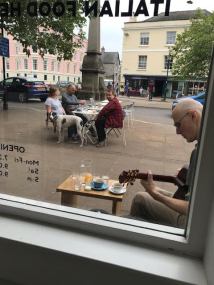 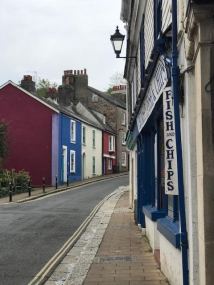 Here’s a few pics of the High Street in Totnes…  top left, looking out of The Curator Cafe, next, a row of pastel houses, then a row of brightly painted houses, lower left, the Willow restaurant at the top of High Street where I had a great lunch, and lastly one of the many great dogs of Totnes.

You may be wondering what happened to Part 3 of Amsterdam. And I haven’t even gotten to writing about Provence. Suddenly my travel notes are out of order because today I couldn’t put off writing about Simon and Sheila.

Also, Lisa is currently in surgery to receive a new kidney, so I can’t put off writing about Lisa either.

Sometimes life re-orders what’s next. I’m learning to go with the flow; it’s not all as linear as we  might think. Sometimes I flow better than others. What a tender and fragile and beautiful world.  May all beings be well, including Sheila’s husband.  And Lisa.  And then the list is so very very long.

4 thoughts on “New friends in Totnes…”