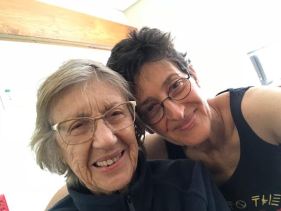 Tuesday, high noon. Mom, asleep. Her lunch tray sits on her bedside table getting cold. Later, I can ask for it to be microwaved to warmth when she’s rested and ready to eat, if she is.  Much goes uneaten these days.

Earlier she went for physical therapy, after which she sat in a chair for… too long. When I walked into her room, she reproached me, Where were you?  I’d promised to be back in 20 minutes and instead it was 40. I apologized profusely because even though I was anything but slacking off, I’d been gone longer than she expected, she was exhausted. Thoroughly. And didn’t have her call light.

Yesterday evening one of her friends from her dinner table group came to visit. It was 6pm. I could tell Mom was already tired.  But, as always, she was polite. Her friend, who is only 96, kept advising, You can’t just sit here or lie around all day! You have to get up and walk! It was not bad advice but the tenth (or 20th?) time she said it I wanted to tell her to back off. Or wanted my mom to.  Mom just looked dubious and kept trying to smile through her fatigue. She’s not really up for visitors yet, but she can’t say No.  Maybe I need to start setting limits.

I sleep a solid 4 to 6 hours a night, but once awake, I start to worry. I wonder how her night was, if she is up yet, if she is doing ok, if she is still alive.  I feel self indulgent doing my morning stretches, or looking at TV or my laptop as I eat oatmeal, and have the proverbial lovely cup of tea. I love my morning tea.

Mom, a few days ago, when she walked with her walker downstairs and sat for a long while opening her mail.   The exercise exhausted her, and she hasn’t been able to do much since.

Today I arrived in her room at the same time her breakfast tray was delivered. She seemed somewhat upbeat and told me she’d been thinking about having a more determined and positive attitude.  Apparently her friend’s advice was not in vain. Still all the determination in the world cannot change certain factors.

Later, she talked repeatedly about dying.  How Terri and I should take her blouses. How we should all be good to each other.  She has been talking this way for days.

Teachings I learned from Ram Dass in 1991 and Jon-Kabat Zinn in 1993 arise in my heart-mind.

From Ram Dass:  We are all just walking each other home.

From Jon, the story of his Zen Master, Sahn Sunim, who was well known for teaching Don’t Know mind.  With a heavy Korean accent Jon would try to imitate, he’d tell how Sahn Sunim would exhort a student in animated voice,

You crazy! You crazy!! But you not crazy enough!!! Only, don’t know!

Jon was smart as hell, so if he thought Sahn Sunim was onto something, I was pretty sure he was right, though I wasn’t sure how to put myself to the test, whether I was crazy enough.

Yesterday, whenever I talked to someone, trying to explain what was happening to Mom, I’d start crying, spilling out gobs of tears and liquid snot.  I was standing in the hallway, pacing, and talking on my cell phone, no kleenex in hand.  A hot mess!  Til then, I hadn’t known how much grief was in me.

Neck deep in it, or actually up to my eyeballs.

My Mom. My grief. My challenge to sort everything out. An ongoing evaluation. Will she get better? Stay the same? Get worse? And based on each possible scenario, what to do? To move her into assisted living or keep her in her apartment with minimal help or 24/7 help? Some parts of the day she seems lucid and determined. Other parts, not at all. How do I make decisions taking into account such a large amount of wonky, conflicting information, and of course, the hope factor?

Mom, bent with fatigue.  She said, I am passive. When I asked what she  meant, she said peaceful. Maybe she meant resigned? or accepting.  I don’t know.

Knowing would be good, but the truth is I Don’t Know! Sometimes the dilemmas seem huge, other times, just the routine, regular stuff of a very old person, now, suddenly, after 98 healthy years, making her way (slowly or quickly? I don’t know) toward death. At first I thought she was the scared one.  Then I realized I’m scared too.  How silly is that?  She is 98.  We’ve been SO lucky to have had her for so long!  And yet, there it is.  I’m standing next to her. Side by side, as if we were peering over the rim of the Grand Canyon,  looking straight into the face of death.

While I’ve been here in Phoenix, tending to Mom, across town, my cousin’s 23 year old fiancée died suddenly, unexpectedly, and terribly four days after giving birth to a beautiful and heathy baby boy. The entire family is heartbroken, and as for my cousin? There are no words for such a loss.  See what I mean about Don’t Know mind?

That said, we all sometimes need our wisest friends or teachers to help us make it through the hardest parts. To remember we are living in a mystery, that mostly we don’t know, even when we think we do, and that ultimately we are all, as Ram Dass said, just walking each other home.

Personally I turn to poetry and memoirs to comprehend the pervasiveness of suffering and to learn about bravery and honesty with which suffering and grief can be faced, held, gone through, survived, and learned from. Ram Dass used to say that saints are just people who have witnessed so much suffering that their hearts have been permanently broken wide open.  There is so much beauty and bravery in this world, but sometimes we have to seek hard for it, we have to, as Cheryl Strayed’s mother said, Put [our] self in the way of Beauty.

As for bravery, I am still learning about that one. 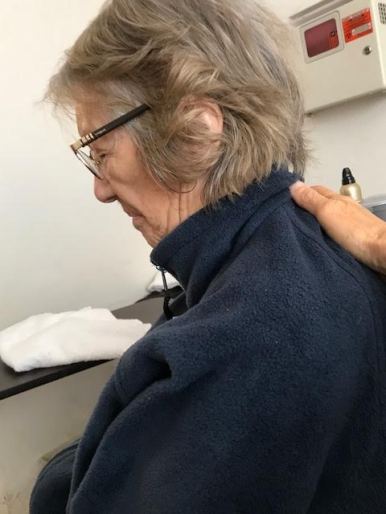 Here I am giving Mom the gentlest (all she can handle) of back rubs with one hand, and taking a photo with my other.  She really loved the back rub.  I’ve been giving her hand and foot rubs too.

I used to feel insecure and uncertain, worried about  pleasing others, but recently one of my mother’s friends, Esther, said to me, You are a very strong person.  And I replied without hesitation, Yes, I am. I heard my own spoken words; they sounded so bold, not geared toward pleasing anyone with false humility, or modesty. I surprised myself. And then, I thought again, Yes. I am. LOL.  Maybe I am finally crazy enough!

I want to tell you one more short story. Back in 1992.  I was going on a lot of retreats with Ram Dass (for a couple of years).  I had had a spiritual awakening the first night I sat with him in April of 1991.  After that I couldn’t get enough.  My heart was wide open (for a solid three months. Not quite a saint, but a wild experience of deep interconnectedness).

One day at Omega in Rhinebeck, NY, we were talking briefly, he and I, and I mentioned that I was a nurse, and his eyes were this pale blue and so loving, like an ocean of love, and he looked at me and said, Oh, I want to be sick and you’ll be my nurse and you’ll take care of me. I was shocked, and I was.. well, of course, stunned and pleased by the compliment, but horrified at the thought of his saying he wanted to get sick and I said, Yes I’ll take care of you, and I said, No, please, don’t get sick, and it was a moment of confusion…. which ended, I don’t know how.

And then a few years later, at a time I was no longer sitting retreats with him, he had that major stroke which left him partially paralyzed and unable to speak.  And I, like other lovers of Ram Dass, brought food over to his friends Marlene and JoAnne who would then bring it to him.  But the food thing didn’t work out very well and after a short time, they said they didn’t need any more food.  I was aware, however, that he needed various kinds of help, and even though a lot of people loved him, there were still needs.  But at that point (and for quite a few years) I was depressed and sad a lot of the time, and didn’t feel I had much to offer. Occasionally over the years I’d gone to Marlene and JoAnne’s San Anselmo house on a Friday evening and a handful of people would show up, and eventually Ram Dass would come and everyone (all ten of us) ooh-ed and ahh-ed over Ram Dass, and I felt shy and uncomfortable but would stay awhile to sing kirtan jai ram, sri ram, jai jai ram, and all that. But that was before the stroke.

After the stroke I felt I should volunteer to help — I wanted to — but didn’t. I missed the opportunity to walk him home (though others did and he is now living well and still teaching in Maui). 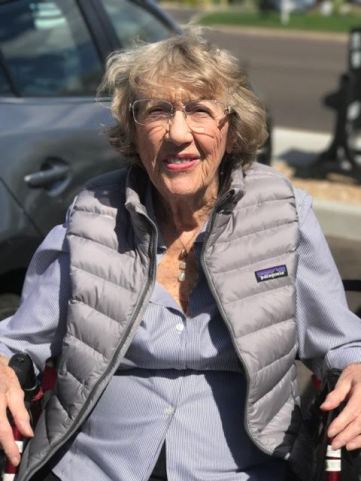 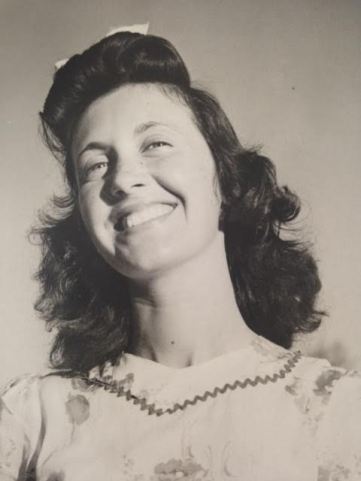 Now, I am walking my mother home, doing it in a way that I learned very much from Ram Dass. There is a way she is also walking me home.  You might have to be crazy enough to see this.  But it’s true.