Every cloud has its silver lining.  I awoke wondering what could be the silver lining to the disaster unfolding in Washington DC.  I thought it must be the awakening of people, our coming together, our waking to a deeper understanding of the humanity we share, the importance of valuing everyone — gay, straight, Black, White, Latino, Asian, Arab, Muslims, Christians, Jews, the disabled as well as the able-bodied. It must be waking to the value of kindness. Understanding the value of diplomacy for the public welfare and not private gain. The valuing of public lands, public school, clean air and clean water.  The understanding of the need to be active citizens if we are to have any impact in a society we would want to be part of, a democracy, a culture of generosity, creativity, and kindness.

The lessons in government and our jobs as responsible citizens are coming fast and furious, much more vividly than anything learned that one long-ago semester in high school.

Here, in the words of Meryl Streep, is an example of a very significant silver lining behind a very dangerous cloud.

“…if we live through this precarious moment — if his catastrophic instinct to retaliate doesn’t lead us to nuclear winter — we will have much to thank this president for. Because he will have woken us up to how fragile freedom really is.”

What worries me about our silver lining — the awakening of people — is that people get tired, can begin to accept a new norm, even if it is a bizarre and dangerous norm, because they are tired.  I say this not as an observer, though yes, I have observed people’s fatigue. I say it because I myself am tired.

My fatigue is partly  a result of witnessing the relentless assaults on all we hold dear by the so-called President, his cabinet of crooks, and the  Republican-dominated Congress.  Trump’s assaults on the press are finally starting to garner some serious blow back from the press itself.  I was shocked yesterday to see a video of a Fox News person railing at Trump for his lies.  It does feel that Trump (Bannon) is trying to set the basis for an abolition of the free press.

The other part of my fatigue is personal.  Right now it has to do with my Mom, who is in a so-called Skilled Nursing Facility with a fractured pelvis.  Though tired and living in a fairly fragile and vulnerable 96 year old body, she is as determined as anyone could be to recover. She is aware she is fighting for her quality of life, if not her very life. If life will have her, she is not done with it. I spent a week trying to fill in the wide gaps of poor nursing care as well as trying to be her personal advocate and support team (along with my wonderful sister). Mom’s spirit is strong, her mind clear, and her body willing, if questionably able. 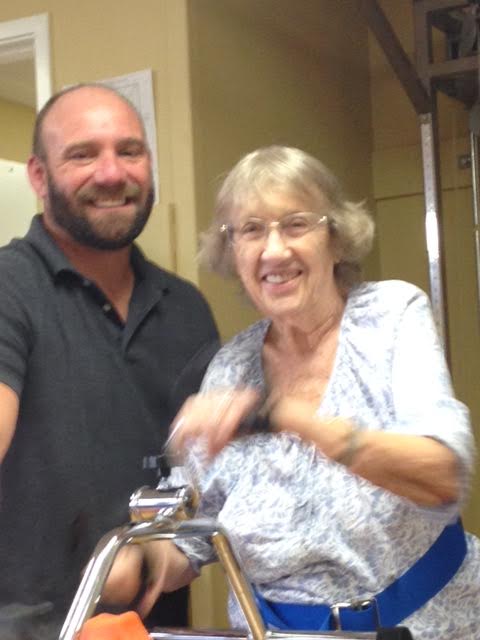 The week in Phoenix, Mom working hard with her physical therapist Bob, Terri on her birthday

I came home after a week to continue living my own life for a couple of weeks before returning.  I feel the anxiety and fatigue of anticipatory grief and of having to monitor as best I can the quality of nursing care from afar. I am on the phone everyday not just with my Mom but with the Director of Nursing. The case manager and Nursing Director have both told me that my complaints and concerns are totally valid. Their words are sympathetic.  I’m hoping that things improve, but anyway, there is a long culture there that would need to be overcome — a culture of making patients wait, not answering call lights in anything that could be called a timely fashion, being impatient and rushed in their demeanor, not listening well, if at all, being rough in the hurry.  It’s not flat out abuse. It’s more passive aggressive. Most likely they are under-staffed, under-trained, and tired too. Cutting corners in terms of tasks and humanity is perhaps their unconscious survival strategy.

However, if we can’t as a society be kind and respectful toward the weak and vulnerable, toward our elders and youth, how is this all going to work out?

This morning, I was trying to think how we can fortify ourselves, how I can fortify my self against fatigue.  I thought of inventing some new anti-trump vitamin pill, but not having the skills for such an endeavor, quickly abandoned the idea.

Next, I thought we just need to be well-rested.  People need to get enough sleep.  On my best nights I get about six hours.  This has been going on for decades, may even be a factor in my recently diagnosed diabetes.  Who knew insomnia was so pernicious?  At least 10% of Americans have chronic insomnia, probably way more.

At my chiropractor’s office the other day I drew the word “Enthusiasm” out of the little bowl of “angel words” sitting on the counter.  Hmmm, I thought.  What to do with this word?  I remembered it had some kind of interesting meaning beyond our normally held idea of it —intense and lively interest in something.  The word originally comes from ancient Greek and literally means “God within”.

Enthusiasm needs to be coupled with intelligence and knowledge to avoid frivolity or zealotry.  Still, without it, Emerson noted, “nothing great was ever achieved…”

Anyway, I’m just wondering this rainy Friday morning when sleep is its usual elusive self about antidotes to fatigue, about pre-cursers to enthusiasm.