I smoked marijuana for the first time when I was 19.  Unlike Bill Clinton, I inhaled. I was a Vista Volunteer in Chicago, and still a virgin. It was 1966. One year earlier (still in my virginal and undrugged state) I was almost kicked out of the University of Arizona for “drugs” and being a bad influence on my sexually active roommate from Payson, Az.  Go figure. 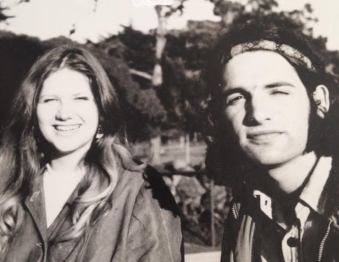 A year later in 1967, I smoked marijuana on many evenings with my roommates Jeff and Melody in our San Francisco flat. It was after their school day at SF State and my work day of selling hippie jewelry at the hottest emporium on Haight Street “Happiness Unlimited”.  Trust me, it wasn’t.

After dinner Melody, Jeff, and I huddled in a semi-circle around our barely functioning living room heater, passing a joint and analyzing the state of the “revolution”.   Personally I felt tormented  by the U.S. war against the Vietnamese people and also by what I’d recently come to know and understand about the nature of Jim Crow and racism in America. Marijuana offered a different, kinder perspective, less bizarre and bellicose  than the racism and imperialist endeavors of my once beloved country. Our society’s war-like and racist nature was the real bad trip. Marijuana also offered the munchies and promoted the sharing of treats and a sense of good will and comraderie  between us. Marijuana was at one and the same time mind-numbing and mind expanding.  It seemed we needed both. Revolution, sex, and drugs were the paradigm of the moment.  Music was the soundtrack. At the corner of Lyon and Sutter (then an African-American neighborhood called the Western Addition, now a gentrifying neighborhood referred to as Lower Pacific Heights) we three were four square living the paradigm.

The next couple of years I experimented lightly with mescaline, LSD, and mushrooms.  I mean really lightly.  I most often felt out of my league, hanging on to my fracturing and re-arranging molecules of consciousness for dear life. I think others enjoyed drugs more than I did. Lucky me. It made stopping easy.

By the time I was 29 and pregnant, I had long since given up drugs and had never really gotten started on alcohol.  I wanted my baby born as healthy as possible.  After she was born, I needed ALL my wits about me for daily life and especially in case of an emergency. I didn’t know when an emergency might arise, so I thought it best to be clear-minded and sober at all times.

Once my daughter was “safely” into her teen years, I tried Ayahuasca a few times.  Taking Ayahuasca required a guide and was spiritual compared to my earlier drug experiences, but I can’t say I ever felt very enlightened by any of my half dozen Ayahuasca journeys (except for the one time I heard the universe’s voice).

My friend Fern made a 52nd birthday party for me at her house across the street.  At the end of the party several guests came over to see my newly created backyard garden.  Someone pulled out a joint and passed it.  Thinking, ah well, it’s a party, I took one toke.  Oh dear.  Maybe the marijuana had really changed over the 25 years I hadn’t smoked or maybe my older body had less ability to handle it.  Did I feel high? Yes.  Were colors brighter?  Yes. Were things a little trippy? Yes.  Was I able to string words together into a sentence?  No.  Was I able to chat with friends as they were leaving my party? NO. I was so disappointed in myself.  Was that the last time I smoked marijuana?  For sure.

Look. It’s not just marijuana.  I’m a cheap drunk too.  On the rare occasion I succumb to drinking one-eighth glass of wine with dinner, I’ll probably ask to go lie down on your couch for a little snooze.

Yeah.  Me and mind-altering substances, not so much.

I think I came to buddhism so I could learn to access new perspectives, happiness, joy, and better communication skills by being in my own unadulterated mind.  Really, just to have the consciousness we do — human consciousness! — is wondrous.  But it’s also true that most of us have had our consciousness shaped by society’s predominant mid-20th Century culture and by the adults in our childhoods who shaped us to mirror their own, not always in our best interest.

Now, coming into alignment — my truest self, my most authentic self, an appropriately-boundaried self — is my work. In Theravadan Buddhism it’s called Vipassana.  Seeing clearly.  Within and without.  So that I can contribute what is truly mine into the world — not someone else’s beliefs, not drugs or alcohol’s mind-altering effects. Just me.  As I am.  Enough.  Truly enough.

These reflections were prompted by this sloth video  I know the young stoned people in it.  Not really. But I get them. I was them.  They seem a little lost and they probably are, but they are sweet, good people. I can tell.  I hope they find their way to eventually being at ease in their non-stoned consciousness.  That they each find their own unique way to contribute, beyond the sentences they are having trouble stringing together in this video.  I love the sloth.  I love each of their reactions to it.  Their comments.  Especially the one about the sloth being its own hammock. That’s something you probably wouldn’t notice and appreciate if you weren’t stoned. Having been there, I get it, that particular appreciation. Beauty, Delight.

This video of Brene Brown and the importance of boundaries is another kind of beauty and delight. This is my current work.  Grateful for my guides. For these videos.  To have work that is mine to do — developing appropriate boundaries.  Also learning to be my own hammock.

And this poem.  I especially love the last verse, and most especially the last two lines.

The people I love the best

without dallying in the shallows

and swim off with sure strokes almost out of sight.

They seem to become natives of that element,

the black sleek heads of seals

I love people who harness themselves, an ox to a heavy cart,

who strain in the mud and the muck to move things forward,

who do what has to be done, again and again.

I want to be with people who submerge

in the task, who go into the fields to harvest

and work in a row and pass the bags along,

who are not parlor generals and field deserters

but move in a common rhythm

when the food must come in or the fire be put out.

The work of the world is common as mud.

Botched, it smears the hands, crumbles to dust.

But the thing worth doing well done

has a shape that satisfies, clean and evident.

Greek amphoras for wine or oil,

Hopi vases that held corn, are put in museums

but you know they were made to be used.

The pitcher cries for water to carry

and a person for work that is real.

4 thoughts on “Being Your Own Hammock….”