A lot of people have been dying lately.  I know. A lot of people are always dying.  I’ve been interested in the subject of death since I was 8, then became more invested/curious in 1979 when my 59 year old mother suddenly had a brain stem aneurysm (an AVM – arterio-venous malformation) rupture. The prognosis wasn’t good.

A couple of years later in 1982  Stephen Levine published Who Dies? An Investigation of Conscious Living and Conscious Dying.  The first big lesson was on page one.

Stephen wrote:  “Today, approximately 200,000 people died.  Some died by accident. Others by murder. Some by overeating. Others from starvation.  Some died while still in the womb. others of old age. Some died of thirst. Others of drowning…

It is as Lewis Thomas wrote in The Lives of a Cell: ‘The obituary pages tell us of the news that we are dying away while the birth announcements in finer print, off at the side of the page, inform us of our replacements, but we get no grasp from this of the enormity of the scale. There are 3 billion of us on the earth [note: Now, 30 years later, there are an estimated 7 billion of us] and all 3 billion must be dead, on a schedule, within this lifetime.  The vast mortality, involving something over 50 million of us each year [now, 55.3 million], takes place in relative secrecy.’ “

When I was growing up, and for most of my life, people did not talk about death or dying, except in furtive whispers;  pity rather than compassion was the mode of the day.  Fear unattended to.  Imagine the loneliness of that death, that grief.

Now we have death cafes, death poetry slams. We have grief groups. We have hospices (thank God, and at last!), we have hospice volunteers. We have deep thinkers (Sherwin Nuland MD, Atul Gawande MD, Ram Dass, Stephen Levine, Larry Rosenberg, and more) who have made aging, illness,  death and dying their areas of deep study, and they have shared their wisdom. We have Oliver Sacks! who gave us so many gifts, including sharing his very own personal journey of dying.

In this way death has been coming out of its tiny casket-sized closet over the last forty years, taking up its rightly deserved space in our private and public consciousness and conversation.

Not the official moniker, but physician-assisted-compassionate-ending-of-life, I’m calling it, is now legal here in California.  Just. Ever so recently. Personally I think I would take advantage of that law if … (Not If I die, but if the circumstances of my death allow/require it). 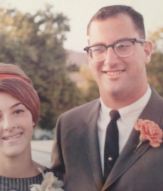 My first boyfriend died last week. Herb Cohen. I was 16 when we met, he, 20. I hadn’t seen him in decades, but I still have pictures of the two of us dressed up for some special occasion. Things didn’t work out for us, as a couple.  But I remember him as a really good, kind person, and grieve his death. 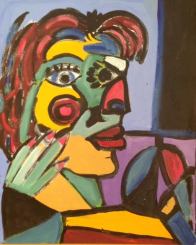 One of the artists at Creativity Explored, Badia Forbes, died last week. Unexpectedly. She was 28.  I love Badia as an artist and as a person. I have several of her Picasso-esque and Modigliani-esque fabulous paintings on my walls.  She loved life and people, noticed things, like other people and their feelings, easily offered up hugs and kindness.  Her m.o. would be to come up to me from behind when I was talking to another artist and surprise me with a hug. I would hug and smile back, then continue my conversation.  I was never not grateful. With Badia, there was always time for a hug and a smile. 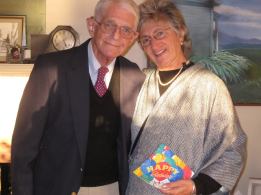 My friend and neighbor Karen’s dad, Herbert Daniel Lewis died a few days ago, a week shy of 99.  I only met him once 18 years ago, but we connected. His warmth, intelligence, and kindness toward me stayed with me.

Friend and colleague Dick Fine died two days ago.  Medical Director of the San Francisco General Medical Clinic where I worked for 18 years, he was a powerhouse activist for collaboration between doctors and nurses, an un-tiring advocate for excellence, intelligence, and compassion in health care, particularly for the poor and dis-enfranchised. 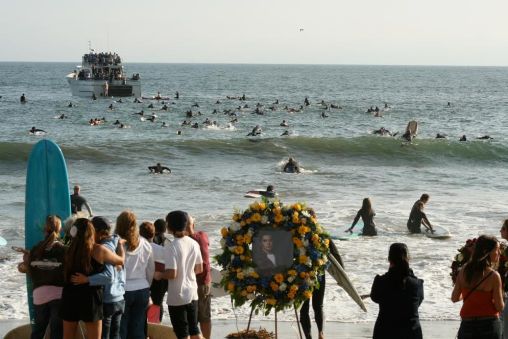 Everyone has these stories.  Stories of friends and families, or friends’ families, or family members’ friends. I remember my own acute pain when my nephew’s best friend died instantly in a skateboarding accident. I didn’t know 17 year old Cody Doolittle (pictured in the flower wreath above), but I felt the deep trauma his death brought to my nephew, and the whole Ojai-to-Ventura community.  I saw the photos of family and friends in a large ceremonial circle of surfboards floating on the Pacific, making use of the ocean’s enormity and in that moment, equanimous strength  to hold that much grief, that many tears.  It was all at once heartbreak and beauty. Such an honoring.

The old and the young dying. My mother is 95 and still going strong.  My dad, whom I had never seen cry, who called me in tears to rush home on that day in 1979, when we thought mom was dying, died himself, rowed himself to the other side in 2009.  The family aided and abetted (my sister’s and my hands were the oars he used to row), while Hospice of the Valley provided almost saintly care and support.

One and two and three degrees of separation the quantities of people dying boggles our life-loving sensibilities.  I’m fortunate to count most of those I know and love who are dying at any one time on the fingers of one hand.  In war zones, this good fortune does not exist.  I grieve for the people of Syria. (and here I let Syria represent all the other peoples suffering similar degrees of widespread violent death.  For the moment, the list being too long). I can not imagine that degree of familiarity with death.

Life sometimes feels quotidian. Not death. How do we even begin to comprehend?

I watched my parents lose each and every one of their parents, siblings, and friends one by one.  I am now in the same process.  Which will continue until I, like my mother, am the last one standing, or like my father, get lost somewhere along the way, out-lived by others.

I have no answers.  There is Mary Oliver’s great poem.. well, two great poems.  “When Death Comes”, and “In Blackwater Woods”.  There is Rilke’s “Requiem”. And Kobayashi Issa’s “The World of Dew“. If you click here to read Issa’s short poem, be sure to watch the brief, beautiful video reflection about Issa and the story behind this poem.

There is having a good cry.  There is saying people’s names out loud.  There is saying Kaddish. Which reminds me, there is having community — too rarely these days (as we discussed, lamented, and tried to envisage in my Tara group the other night).  Because even though we are very impermanent, we are also very inter-connected.  In strong, meaningful community (religious, spiritual, familial, or whatever), we can hold and be held in all the beauty and grief death and dying bring with it.  I don’t think we were meant to go it alone.

“And did you get what uou wanted from this life, even so?

And what did you want?

12 thoughts on “A Lot of People Have Been Dying Lately”