“Writing is also an important bulwark against chaos…   I have to write to come to terms with experience in one way and another.”  Oliver Sacks, from Diverse Elements in Harmony

And… I always love me some wise, old, young Courtney E. Martin at OnBeing, who writes  here  about being a writer.

I never Wanted To Be a Writer. I never wanted to be “writerly” or like Gertrude Stein, a writer’s persona. Though I had a roommate once who did like to write, and when she wasn’t calling me Pilar (because she thought I looked like a Pilar), she wanted me to be her Alice B. Toklas, for writerly-romantic reasons, as much as purely romantic ones.

I became things I never longed for. Revolutionary. Nurse. Mother. There were multitudes of reasons. I loved being each one. Until each no longer fit. Then, late in life, I became a writer. I’m not saying good. or whatever. Just that I write, and know the love and need of it.

The writing thing keeps surprising me.  It’s not whatever it is I thought it might be.  Back in high school.  When I could easily stamp out the formulaic five paragraph essay required by my English teacher Mr. Cowie each week.  He was the only teacher to ever offer his opinion of my abilities.  You could be a writer for a magazine like Time, he said.  For a flickering second, I felt the warm pleasure of praise.  But as I couldn’t for the life of me understand why I would ever want to write for Time or any other magazine,  as, in fact, I couldn’t imagine ANY kind of future me, I dropped the praise (and with it, the idea of being a writer) seconds after it arrived.

It was as if my job was to simply embrace complete not-knowing until “knowing” would somehow magically arrive (perhaps via prince-on-a-white-horse or something even more unlikely).

I became a university student,  where mis-haps of various absurd and dis-heartening types found me. I was ripe for the finding.  First with a wild “older” (19 year old) sophomore, roommate, who came back to the dorm, post-dates, with her bra in her purse. I thought this very racy. She was from Payson, Arizona, a small town she said the kids there called Payson Place (remember Peyton Place?) ’cause there wasn’t anything to do but have sex. She was nice, except for her anti-semitic parents who with a well-told lie to the dean of the 25,000  University of Arizona student body, probably changed the course of my life, or who knows, though their intention was bad, maybe saved it.  By the end of a crazy year I dropped out.

Formal schooling did not feel like an option. It was Vista  (Volunteers in Service To America, the “domestic Peace Corps”) or taking off to wander in Europe.  My parents made sure that Vista became my choice.

I”m on the right with 3 other Vista Volunteers in our orientation group, Sept. 1966.

An approach they later regretted, as I was assigned to live and work in Chicago’s north side neighborhood of Uptown. Uptown was ground zero of a community project organized by some of the nation’s brightest, most articulate young radicals of the day.  It was 1966, the early days of a national, massive cultural, social, and political upheaval – civil rights, anti-imperialism, drugs, sex, and rock ’n roll. Vista assigned me to work in the heartfelt, but sedate social work atmosphere of Hull House, while my heart, body, and soul were gripped by the radical, on-the-streets-in-the-tenements JOIN Community Union.

Me & a friend, Junebug, in front of JOIN Community Union storefront. Summer ’67.

After my year’s service, I moved to San Francisco — a milder climate and culture for my still insistently unknowing self (after falling in love with one of the top JOIN organizers, who wooed me, then dropped me, without word, for Bernadine Dohrn, then-law student, eventual Weather Underground leader, and wearer of the mini-est of skirts and the highest black boots. She looked smashing on the back of his motorcycle. Heartbroken as I was, with my 19 year old maturity, I could see clearly the wisdom of his choice). 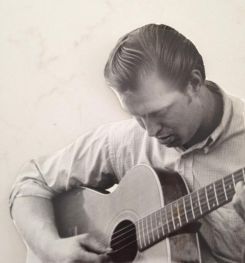 The organizer.  He often had a guitar in hand, when he wasn’t on his motorcycle.

Though my sympathies always lay in the direction of social justice, I was never good at being an organizer. Still, I racked up many marched miles, as well as a stint with Radio Havana Cuba and Radio Hanoi’s Voice of Vietnam.

I became a nurse, though that too had never been an ambition. I needed a paying job and had no talent for being a sales girl or secretary. I loved the intimacy of being with patients. I loved understanding how the body works and how to tell when it wasn’t, and why, and having some idea what to do about it. I had fantasies of being a “revolutionary nurse”,  though that never came to pass.

I became a mother. The most powerful life experience I have ever had.  It’s not like one ever stops being a mother, though the actual work of it — direct engagement — is time-limited. The child grows up and wants her own life free of what at one stage is a mother’s absolute duty —care and attention, and at another point, becomes meddling.  I never wanted to be a meddler, though, I think as a mother, it comes naturally. I have to fight the urge. Not always successfully.

Eventually because health issues and and my chronological age seemed to indicate it, I took early retirement.  My daughter turned twenty-three and moved to New York City. I was thrust back into major unknowing.  Which somehow led to depression.

Which eventually led to writing.

That, my friends, is the ridiculously short version of my life story.  The skeleton of my life.  Maybe someday each sentence here will be a chapter title.  Not that there has to be a book.  Being-an-author is not something I’m longing for.  I guess in some ways I am still waiting for my prince-on-a-white-horse.

But the strangest thing happened. While I was waiting, my prince arrived, in the form of writing.  And now it doesn’t matter what else happens.  Because I have been kissed awake into a writer consciousness, which apparently for me, at least, means being a spelunker of the heart/mind, body, spirit. I like climbing around down here. I’ve got my headlamp on. It’s fun turning corners to find the stalactites and stalagmites. Fresh water springs. Strange creatures. My child, alive with possibilities. Wounded. Powerful.  My old woman, my friend. I hold them both. And this magnificent and endangered world and species. Our species. And others.  Writing my way into and through the not-knowing. Allowing myself to be outside the judgements of others. Learning to acknowledge and ignore my own judgements, because I have finally gotten curious enough, and am no longer willing to allow someone else to define or limit me, not even my own judge. Nope. No more. Things have changed. I’m a writer.

3 thoughts on “I Never Wanted to Be a Writer… and a few autobiographical memories.”