As I get older I have difficulty remembering names and dates.  That said, there are some date 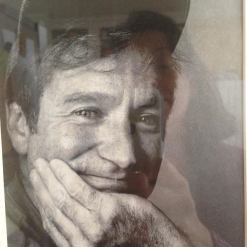 s I don’t forget —  birth dates of my mother, daughter, myself, even my father who is gone six years now.   I was in NYC visiting my daughter on Sept. 11, after she first moved there in 2001.

Our plan was to take a taxi to Battery Park that morning and board the 9:30am ferry to Ellis Island (through which all four of my grandparents passed). The sky was its bluest, temperatures Goldilocks-ian. I won’t ever forget that day, or that date.  Just thinking about it now, I feel my chest tighten up through my throat, like I’m going to cry and choke at the same time.

Last year, I added a new date to my memory bank.  August 11, 2014.  It was a glorious morning at my poetry class for the OWLs (Older Writers’ Laboratory) at the Bernal Heights Library. San Francisco’s poet laureate Alejandro Murguia had visited and charmed us all.  After class, I did a few errands.  Driving down Teresita after my last errand, on my way home, mid-afternoon, I listened to NPR.  The usual blah blah blah bad news, and then  suddenly, without segue, without warning, “actor comedian Robin Williams was found dead in his Tiburon home today.  Suicide is suspected”.  I wailed “Nooooooooo!”  to the unresponsive universe.

You’d think I knew him personally be

yond the few minutes I’d hung out and talked with him on Christmas Eve day in the medical clinic at San Francisco General many years ago. Photo to left: Robin and the 1M3 staff. He was all humanity and kindness. I cried my way home.  Cried the rest of the day.  Much of the next week. Month.  Grief? Depression?  Both were mine.

This thing.  About depression.  About suicide.  About passing for “ok”.  About people not knowing. Living the pain alone. In secret.  Or about people knowing, and not doing anything, because you seem ok, or because we don’t know what to say, or do.  About people telling you how to fix yourself. “You should…”  “Why haven’t you..?” “Well, it worked for me!”   People trying to be helpful, annoyed if you’re not grateful for their advice.

I’ve known there were a lot of depressed people for awhile, partly because I worked as a nurse, partly because I’m human.  I know a few who committed suicide.  One of the smartest, most talented medical residents I ever worked with at SF General.  A couple of different members of my meditation group.  Relatives of friends of mine (who I didn’t know, only knew of).  In my meditation group, after one of the members had committed suicide, the teacher asked for a show of hands.  How many people (of the 200 in the room) had known someone who had committed suicide?  About 75% of the room raised their hands.  We were all gob-smacked.  How could such an enormous suffering be so well hidden from the public eye?

I’d considered suicide on occasion, but whenever the consideration arose, I considered it NOT an option for me.  I’d seen and experienced how devastating that option is for those left behind.  My own personal suffering was never so great that it prevented me from seeing that.

Still, what to do when your suffering is that great? Great enough to cause you Not to enter others’ pain into your equation, your decision to end your life?  I don’t blame Robin Williams at all.  I didn’t know his suffering.  It must have been severe.  I’m sure of that.

After Robin’s suicide, suddenly I started noticing depressed people everywhere.  Like when you first learn a word, and then hear it all the time, as if it had never existed before, but now is everywhere. How could I have missed it before?

People with depression were coming out of their self-imposed closets. I decided to join them in the coming out process. It’s hard to comprehend how many people suffer from depression.  Every time I turn around, it’s another celebrity, author, journalist, doctor, friend, or friend of a friend.

It’s like people didn’t used to know there were gay people, or if there were, it was thought gays were the tiniest minority.  Over the last 40 years, gay people have been courageously coming out of their closets in ever-increasing numbers, showing up for their own true lives.  The numbers are not small.

Being gay, or being depressed,  or whatever.  Maybe not only are they Not aberrations, or even variations.  Maybe they’re Life!  Expressing itself in all its joys and sorrows!

Sexuality and sense of gender, on a spectrum. Being depressed on a spectrum. Autism on a spectrum.  Binary ideologies of yesteryear  are inadequate.  Gay/straight. Good/bad. Health/illness.  Optimistic/pessimistic.  Happy/depressed.

Once again.  Labels, and how we perceive people, are not necessarily a reflection of reality.  Sometimes I think the word “depression” is similar to the word “God”.  When two (or more) people use either in a conversation, are we even close to talking about the same thing?

There’s at least ten, or fifty, or a hundred directions I could go from here.  Labels. Perceptions. Filters.   How we do & don’t understand ourselves and each other. Courage. Joy.

It’s a complicated business this being human.  Today, one year after his suicide, I’m remembering and missing Robin Williams who embodied all of this.  And more. And so much more.

There were so many brilliant videos to choose from.  This was one.  Go look at more.  Have yourself a joy-filled, heart-breaking feast!