San Francisco is being its usual summer-y self.  Cold, grey, and windy.  I used to have more energy for it, though never did I ever like it.  When I first came across a San Francisco summer — on the corner of 5th and Market when I was eight — sitting on the cold concrete sidewalk in an attempt at pigeon-feeding, I remember having the discreet thought — This is a dark city.  By contrast of course, in terms of pure quantity of sunlight making it through, Phoenix, where I grew up, was pure sunlight.  There I longed for the occasional gathering of dark clouds and the terrifying thunder and lighting storm that would bring relief and fresh vitality to the searingly hot, enervating atmosphere — the kind of heat that led teen-agers and twenty-somethings to make poor decisions on warm electrically-charged, but not atmospherically-discharged, evenings. 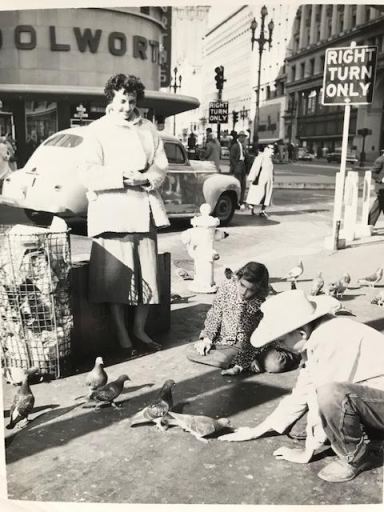 San Francisco summer 1955, dressed in whatever warmth we had.  You can see there’s a little sun here, but somehow it seemed really dark to me.

Back then, not for a minute did I think of moving to such a dark city.  I didn’t know in autumn, there are actually two months of reliably sunny days, and that, though the winter was a crap shoot, meteorologically-speaking, there could easily be as many sunny days as rainy ones.  I must have sensed however there would be no summer garden parties, because summer wasn’t a crap shoot, but a predictable daily event of cold, grey and wind.

For me, what Phoenix lacked most was a sense of community, of there being a there there.  I know Gertrude Stein  was reputed to have written this about Oakland, and maybe it was true of Oakland, but for me, Phoenix was my there-less Oakland. For my father, however, it was all the there he would ever need, loving Phoenix as he did, and it gave back to him big-time.

Not to me. By the time I was 17, I had simply bumped into too many John Birchers, or their children, who let me know that whether for my Jewishness or my Democratic Party politics, I didn’t belong. While blazingly sunny, Phoenix had this darkness only some of us knew about.

Here I’ve just turned 19, headed to Chicago for a year of Vista Volunteers, laden with my art supplies, knowing even then I would never be coming home to live again. I cried so hard on the plane.  After the year in Chicago I immediately moved to San Francisco.

For all its darkness, San Francisco had light. A lightness of being perhaps. A welcome, or at least an acceptance to those who felt they didn’t belong in their hometowns. Like lots of other people, I came. Because there was a huge anti-war movement, I thought I came for that.  Because it was the Summer of Love, others thought I came for that.

My parents, hurt and angry that I had seemingly (well, yes) rejected their lifestyle and their embrace of capitalism and terrified that I had fallen into the hands of revolutionaries who would lead me to commit all manner of mayhem (Not!) alternately sent me care packages of toilet paper, soap, warm clothes, and treats, and letters filled with worry, accusations, and judgement.

Me and Mom in earlier, happier days.  Sitting on a chair in my Dad’s photography studio, aka the garage. On that block, there was a whole outside kid community — playing, fighting, climbing trees, running after the ice cream truck as it went down the street.

Yes, I was a radical seeking peace and justice, but my main though poorly understood or verbalized (even to myself) mission was always to find community. For awhile, I lived with people in the San Francisco Mime troupe, so I was on the edge of that community, then with people in the Cockettes, another community I was on the edge of… I worked at the Los Siete Free Clinic, so there was that for a couple of years, and then women’s health collectives that grew out of that… But somehow, for me, all of that was wonky community with no enduring there there. I tried the Chabad House of Love. Yikes! That wouldn’t work. Later I tried another synagogue which also didn’t work. Then a Buddhist sangha for 18 years, which partially worked, until it didn’t.

There are still people and friends I go way way back with (forty to fifty years) and others I only go ten or twenty or thirty years back with.  I consider myself lucky in a lot of ways.  To know and love a lot of really good people.  To feel myself loved back.  However, all these friendships and love don’t make community, don’t make for social integration. The lack of community isn’t always uppermost in my daily awareness, but on a cold, grey, windy day, like someone with arthritis on a rainy day, I feel it.

I was talking to my daughter about this this morning.  She and her husband live in New York, so though we talk quite regularly, it’s not like we’re in each other’s daily lives.  I was telling her how a lot of my friends have partners and families and that that is their main community.  She reminds me it’s not just individuals, even couples can feel they don’t have much community.

I was listening to a show on KQED the other day, a guy who’s written a new book on how the widespread teaching of mindfulness separated from its spiritual home, has been been co-opted by corporations and the military for their own ends— better employees and soldiers. I tried to call in to offer my valuable two cents, but the lines were jammed with calls.

The thing is mindfulness is only the first step. In and of itself it’s not a game-changer. If you practice it, it might or might not calm you down a bit, it might or might not help you see more clearly.  If it does help you see more clearly, you might have some ideas about what actions would be best to take in any given situation, so that you can be responsive rather than reactive.  But it’s hard, because we live in a society where the individual is the main unit of existence.  Everything is geared to that.

When my energy is good, I, Gayle, the individual can make things happen.  I have tools in my tool box for creating…

But today I am in my 9th day of jet-lag.  I have two styes in one eye, which means having to apply frequent warm compresses, which I need to be home to do.  The weather has been unrelenting. Sometimes on a grey day like this, I feel like one smiling face could change everything. It’s a fantasy I hurt myself with.  Today I’m busy fighting off depressive narratives, half-winning.

I went out for a walk.  An intentional practice of finding beauty.  It helps.

I try to be philosophical. Some days are easier to be so than others. It helps quite a lot when the sun is shining. Not a Phoenix kind of sun. Rather, one that reminds me it’s a gift and not a destroyer.  But of course it is both.  So, there’s that too.