I was feeling really sad leaving Canada this morning after just a week there — a few days in Montreal, another few in Quebec City.

I was thinking I’d tell you about some of the sights I saw, the other people in my senior tour group (Road Scholar), our fabulous tour guide, Lise, and most definitely bilingualism — what a great thing it is.   Also, what it feels like to be one gluten-free vegan traveling amongst a group of people pre-occupied with meat-based meals. Not so great!

Despite my 71 years on the planet, I had only barely been to Canada.  A week in Vancouver in January 1971. Snow-covered and bleak is what I remember. My second experience in Canada was about 15 years ago when I went on an Alaskan cruise with my parents and sister.  I spent one whole night in Vancouver before taking off for Alaska.

In other words, before this trip I’d seen less than the tiniest fraction of Canada.

Personally, I know two Canadians — one from the Vancouver area — Rita Kampen, who I met on a writers’ workshop with Cheryl Strayed in Maui more than three years ago and the other a Buddhist teacher by the name of Pascal AuClair who was my main teacher on a month long silent meditation retreat 9 years ago.  Pascal is French Canadian and lives in Montreal.

I have the deepest respect and admiration for both Rita and Pascal. Both embody kindness, respect, warmth, humility, intelligence, and joie de vivre.  I was amazed to find these same qualities in so many Canadians I interacted with. In fact, I could see these qualities in the society as a whole.

So, it was a rude how-do-you-do when we (on Amtrak) crossed the border into the United States and had about 15 ICE agents, armed and clad in black board the train to check our passports.  The custom form we were given at the start of the trip asked, among other questions, if we were carrying any food, nuts, seeds, vegetables, or fruit.  Since it’s a ten hour ride to NYC (where most passengers were headed) most of us had food with us.  We were told maybe we didn’t have to check the “yes” box if our food was for lunch, but if we had any citrus, like an orange (I did) or other fruit, they might confiscate it.  So of course I was on edge. I was semi-lying per how we were advised; I’m sure I wasn’t the only one. I also had a little packet of chocolate and walnuts.  And another small baggie of nuts and raisins. And a pear. I’m telling you! It was all on the do-not-bring list.  Contraband up the wazoo!

When the grim faced officer stood over my seat, I handed over my passport and customs form and tried to look innocent.  He looked at my passport and entered numbers into his little hand-held  computer. He barked questions at me.  I wondered if I should confess my lunch ingredients and risk confiscation, or face possible fines. He looked Aryan, perhaps a motorcycle gang member in his free time. I felt Jewish. guilty. vulnerable.

When I said I’d been on a senior tour group, he asked Where are the other people in your group? Are you with people or alone? it sounded like,  What kind of made up story is that? Funny I don’t see any other people with you.

When he asked where I was from, I’m pretty sure I saw him wince when I said San Francisco, quickly followed by, Where are you going now? which I heard as  What the hell are you doing on this train? this is not the way to go to San Francisco!

I proffered more info than I needed to at this point, telling him how my daughter lives in NYC and I’m meeting her in Hudson, because you know the ticket over my seat read HUD.  I intuited his suspicion, and wanted to quell it before the next question was lobbed. I guess I seemed subservient enough.  He grunted, handed my passport back to me, and moved on.

With so many officers in the different cars, the stop shouldn’t have taken long, but we were there for an hour.  Finally, an agent came back to our car with a young Latino guy who said to his family — his mom, aunt, and another older family member — in Spanish, they won’t let me pass.  He spoke softly, as did his family.

His mother asked the young woman agent (who looked like she could be Latina, and must have spoken Spanish because the mom didn’t speak English) Can I and his aunt talk with him?  The agent said she’d ask.

Eventually they all talked.  A dozen or so agents escorted the young man off the train and into a van.  The family asked if they could go with him.  No, they were told.  They were taking him back to Canada, and the family would have to stay on the train til the next stop (another 20 minutes) and find their own way back. 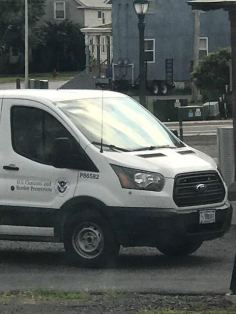 Left:  The train station where ICE boarded Amtrak.  Middle:  The van that took the young man back to Canada.  Right:  The Mom, aunt, and older gentleman (father? uncle?) got off at the next stop and asked the cab driver for a ride back to Canada.

After they took her son away, I told the Mom I am so very sorry.  So very very sorry. She nodded and thanked me.

I’m SO angry at my country.  Canada is a much better place in so many ways.  But America is mine — to try to change, to try to fix, to join hands with the millions of us whose hearts are aching and breaking because our leadership has gone off the rails, because our society and culture has lost its way.  This is my work, our work to do. After the agents left, I had a stomach ache, but I ate my lunch anyway, including the contraband pear, which wasn’t even sweet.