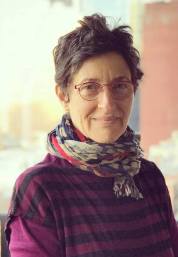 You’re standing in a field, when suddenly something bonks you on the head, but when you see the object, round, red and short-stemmed lying on the ground, if you’ve any hunger in you at all, it won’t take long to realize the missile was an apple, there was no perpetrator, just a falling… apple.  You bend over, pick it up and take a bite.  You were hungry, so it was a gift after all.

Sometimes gifts arrive strangely.  Like tonight.  A black out, the only light coming from my laptop, though the wifi is down too. I decide to write, which means hanging out with my self, an interior visit. I didn’t know I was hungry.

The storm Arizonans call monsoon began gathering — suddenly — early evening.  We’d just finished another of our nightly games of Bananagram, and just gotten Mom to bed.  An event, these days, in itself.

Through the sliding glass patio door, I saw ginormous dark clouds, glimmers of lightning, and the tall thin trunks of palms in the distance bending, their fronds whipping furiously in one direction. I heard the wind. Howling.  I wondered about hurricanes or tornados.  Tentatively, I stepped outside onto the deck. Would the ambient electricity think me a lightning rod? I recklessly overcame my fear for a few minutes, then stepped back inside.

The lights in Mom’s apartment flickered off and on,  sirens wailed in the distance, and suddenly, the lights went out. It was dusk. I looked for my cell phone in the darkening room. It had about 10% charge left. Fuck!

Since Mom was safely tucked in bed, her two caregivers Stephanie and Maria rushed out to their cars trying to beat the storm home.

Mom was anxious.  Or maybe it was me.  I took my cell phone flashlight and hurried around her apartment in search of some kind of lighting system other than the several candles I could see. Lighting them was not an option.  I certainly couldn’t allow them to burn without me there awake to watch over.

I rifled  through drawers in Mom’s den; there must be a flashlight somewhere.  There’s not.  Then I hear Mom call urgently, shouting Gayle, Gayle!!  She doesn’t wait to see if I answer. She keeps calling like there’s a bear coming at her.  Fuck! I hate when she does this.  She doesn’t really need anything, except me, and I’m busy looking for light. I’ve got my own fear going.  How am I going to navigate this night with no light?  How’s Mom going to deal with it?  I don’t have answers.  Just questions, just anxiety.  I want Mom to stop yelling.  I tell her to calm down and go to sleep.  I try for loving reassurance but my voice is tight and sounds bossy, even to me.  I need her to go to sleep.  I need the lights back on.  I tell her, when the power comes on, the lights might all come on at once, that she shouldn’t be scared, that her nighttime caregiver will turn them off when he arrives.  I tell her I can’t remember which switches were on when the lights went off.  It feels like the weather version of the GOP-Trump regime — out of control and dangerous. Fuck!  I’m tired.

Miraculously Mom falls asleep and I head down the hall to my own apartment in the senior living place.  There it’s pitch black except for the intermittent lightning.  It’s silent, except for the distant sirens, and wind, and what is that?  Rain?

My cell phone is almost dead. I turn it off, in case I need it later for a true emergency. Fortunately my laptop was fully charged as the black out started. No electricity for almost an hour now. I bring my laptop into the bathroom with me so I can see to pee and wash my face.  I bring it into the bedroom to find my pjs.

With no wifi or tv; the howling wind and lightning are my only entertainment.

After her illness, Mom’s cognitive abilities have been slowly coming back. They’re almost back to where they were before she was sick. It’s amazing!  I wouldn’t doubt if nightly games of Bananagram have something to do with that… also the company of kind, funny, fun caregivers and friends.

In tonight’s game, Mom put down the first word.  Her word is memoir.   Odd. Mom is not much of a reader.  I tend to think she’d use the word autobiography rather than memoir, but obviously didn’t have the right letters for that.  A memoir is what I might want to write.  After I help raise money to get imprisoned asylum seekers out of jail. After I register voters for November, after I participate in getting people to the polls to vote.  After we flip Congress Blue.  After.

I know this sounds drama-queen-ish, but frankly I don’t see much future for us humans, let alone Americans, if we can’t win the elections in November.  My possible memoir will have to wait.

I procrastinate a lot with my writing.  I like to write and edit, but there’s the deep dive necessary to understand my own shit, not just to tell the story — but to actually understand it. You’d think it’d be easy, but it’s not.

Lots of stuff keeps me from getting serious about writing a book… shopping, cooking, eating, cleaning up.  I didn’t say important stuff.  Just stuff. Also tv detective mysteries when I feel lonely, what the Brits call cozies. Not the violent American ones. I like the psychological ones from Britain, Ireland, Australia, and Sweden.  I can also spend hours taking photos.  Pulling weeds.  Cleaning my kitchen counters.  Feeling sad and looking for dopamine online. Being Mom’s advocate.  All this takes time.

Tonight’s black out reduced the number of ways I can distract myself to…well, zero.  In the beginning (an hour and a half ago) I was pissed and scared. I’m still worried about Mom, especially with my phone turned off.

In front of me, however, is an illuminated white page.  Blank.  Inviting.  Reminding.  Reminding me of the work I want to do.  Memoir.  I remember my childhood terror when it seemed lightning was striking inside the room I was in.  And just now, a rumble of thunder actually shook this building.  Like the shudder of an earthquake.  There’s no earthquake, just a storm from my childhood.

Tomorrow I’ll go buy some battery-powered light source for Mom.  She may need it.

The day after the storm I bought this cutest little battery-powered lantern for Mom at Ace Hardware. She loved it. What do you think?

August is the month of monsoon.  When I was a child, they didn’t call it that.  They called it thunder, lightning, and rain.  I wonder where they got the word monsoon from?  It sounds so exotic.  Perhaps the soldiers brought it back from Vietnam, the war that cataclysmically affected the lives of millions of people in southeast Asia, punctuated the end of my childhood delusions of a just, peaceful America, and set me on a path seeking truth and opposing injustice.

Tonight’s lightning and thunder storm takes me back.  Hearing it called monsoon I’m 18 again, crying for the people of Vietnam, and myself.  Somehow it seems wrong that we appropriated this beautiful word after such an unnecessary and horrifically destructive war.

It’s weird, isn’t it? how easy it is to turn back into the kid you were when you go back to your hometown and family of origin.  Tonight, in the dark, I’m a terrified five year old, a distraught eighteen year old, and an anxious yet calm seventy year old.  All at once.  It’s ok. My Mom is ninety-eight. Like the proverbial nine-lives cat or the ever-ready-battery-bunny we jokingly compare her to, she overcomes and thrives.  She won’t always, but for now she does.

There are friends at dinner every night (night being at 4:30!) in the dining room.

Life is long and short.  As the Buddha said, ten thousand joys and sorrows.  As Ho Chi Minh wrote, After the rain, good weather.

The wheel of nature turns without pause

After the rain, good weather.

In the wink of an eye

The Universe throws off its muddy clothes.

For ten thousand miles the landscape

High in the trees, amidst the sparkling leaves,

All the birds sing at once,

People and animals rise up reborn!

What could be more natural?

(It would be nice to recite this poem at a celebration when the GOP-Trump regime leaves office and goes to prison en masse. At the point when we understand that, despite the enormously high price paid by many of us, and especially immigrants and people of color, the GOP-Trump madness was a gift after all because it caused our nation to wake up and build a truer democracy and a more equal and kind society.  It’s a far stretch I know.  Still, Ho Chi Minh held this possibility through decades of colonial, then imperialist wars. I hold it now. Or… at least, I’m trying to).

*Many thanks to Lincoln Bergman for this beautiful translation of Ho Chi Minh’s poem.

2 thoughts on “A Gift After All: Mom, Memoir, Monsoon, & Madness”