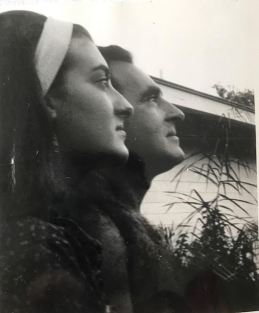 I don’t usually cry at the gym, but sometimes I do.  Like when I’m listening to Hamilton and just before Aaron Burr’s bullet reaches him, Hamilton says I imagine death so much it feels more like a memory. Oh, my god.  If I don’t cry at that point, Eliza’s song at the end always gets me. It tells how she (Alexander Hamilton’s wife) kept his story alive, and then, there’s that part about the orphanage she created.  That song is a total tearjerker. I squeeze my eyes closed, try not to let the tears escape down my face.

I don’t like to cry at the gym.  I love the gym.  I’m strong at the gym.  I don’t want to give anyone the impression I’m a wuss.  Not that I care that much but…  I’m not a wuss. It’s just I love to listen to Hamilton.  It’s musical and story-telling brilliance; also it’s rap and rhythm bolster my energy for a strong workout.

I might have to find a new work out tape; this last song in the show, Eliza’s song, is SO sad…

The other time I might cry at the gym is when I see someone — an older man — who is “frailing up” — I call it — but still determined.  I saw one of these guys the other day with one of those stretchy rubber band thingies tied around both his legs, just above the knees.  He was standing by a half wall, and as I pedaled my exercycle, I watched and  wondered what he was planning to do with his tied-together knees.  Holding on to the half-wall, he started stepping to the side. Left foot to the left. Then right foot to the left. Walking the length of the wall sideways in one direction, before heading back in the other.  Dad. I thought. Then, tears.

As a younger and middle-aged man, he was highly aggressive and competitive. He could also be harsh. Sometimes the judgement he delivered was physical (Mom threatened us with “The Hand” when he got home), but often it was just a word of scorn or a look of withering disdain.  I rarely felt good enough, smart enough, or pretty enough. Mostly I just tried to stay out of his way. That was safest. But not always possible.  I envy women who had fathers who adored and encouraged them.  I’ve seen in my own and the lives of my friends the impact and reverberations of the two kinds of fathering. The long-lasting effects, worlds apart.

In my forties I went to an event at the Bill Graham Civic Center where, as I recall, both the Dalai Lama and Thich Nhat Hanh, as well as other spiritual leaders, were teaching.  I remember being in a side room with Thich Nhat Hanh. He was guiding us in a meditation…

Breathing in, I’m aware of the suffering of the world, breathing out, I see a flower blooming…

the list went on and on… Eventually he said,

Breathing in I see my father as a five year old boy, breathing out I smile at him.

I was stopped in my meditative tracks.  My father?  as a five year old boy? I couldn’t wrap my mind around it; it was an image, an idea, a question that resonated so strongly, I knew it would stay a long time.

My dad was proud of me when I graduated from nursing school at age 34.  I know because he told me.  Another time, years later, he expressed interest in my knowledge of the brain in relation to stress.  I explained the amygdala to him and for once he was impressed with what I had to say. It was such an unusual moment, I still remember the afternoon, the two of us sitting on the couch in my little flat on 12th Avenue near Lincoln.  Another time, in my fifties, I  gave an impromptu song recital for my parents.  I’d been taking singing lessons and had a few songs I’d been working on.  My Dad looked surprised, then smiled, then blurted,

From then on he was my biggest fan.  When I sang, he looked happy, and didn’t criticize. I felt safe. The safe feeling was wonderful but impermanent;  obviously I couldn’t sing all the time.

The last time Mom and I dropped Dad off at the gym (because he was no longer driving himself) he was probably 90, maybe even 91.  We watched this six foot tall, skinny husband/father walk at tortoise speed, scarily unsteady but oh, so determined, the ten steps to the gym’s front door. We looked at each other with wonder.  What ever was he going to do at the gym?   Despite a failing mind and body, he totally wanted to go.  At home, Dad and I would stand side by side in the kitchen  with our hands on the tile countertop.  I would talk him through the exercises the home health physical therapist had suggested.  Right leg out to the side.  Right leg back.  Left leg out to the side. Left leg back.  I put little smiley face stickers on the kitchen cabinets to remind him to face forward.  He went at it with his athlete’s determination.

There are photos of my Dad as a young man in sepia tone — long, lean, sun-tanned, and handsome.  He worked summers as a lifeguard, and would eventually rescue me from a near drowning when I was ten.

Dad and his friends, Dad, second from left… 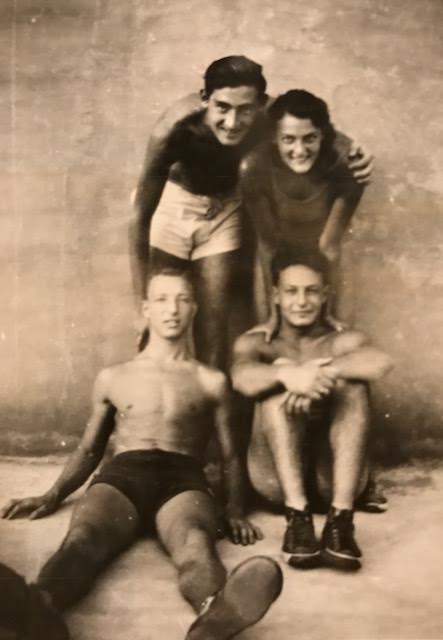 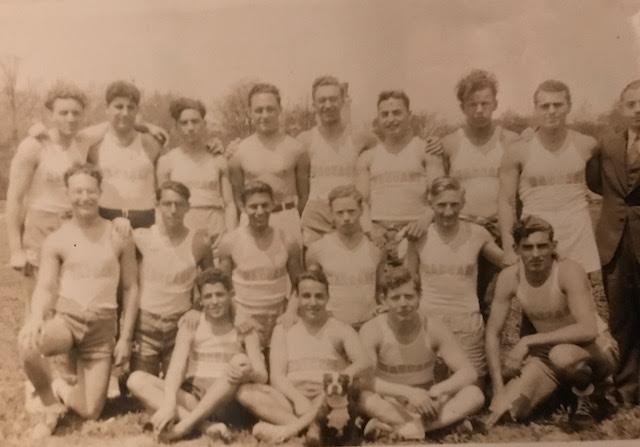 Dad was a champion hand ball player, starting as a teenager in the Bronx. Eventually he was the State champion of Arizona. The mantel above the fireplace displayed his trophies. Always there were black high top tennis shoes, hand ball gloves, and the hard black rubber hand balls. I didn’t see him play handball until I was 33.  He was 63. With 3 year old Anna in tow, we stopped by his gym, went in, found the viewing area above the handball courts, and sat ourselves down. I was gobsmacked by the fierceness of the game, his agility, grace, and force.

When he got a hip replacement in his 70s, he stopped playing.  He took up riding a bicycle instead, and continued to go to the gym.

In the few months before he died, our relationship changed radically for the better.  The more dementia he had, the sweeter he became, the less I feared him.  Our conversations were necessarily extremely limited.  Mostly I played my ukulele and sang.  He smiled and applauded.  One day as we sat at the small kitchen table together, Mom briefly walked in and out and scolded him for some infraction. He leaned toward me conspiratorially and confided,

I’m trying to be a good boy, so I don’t get into trouble.

Breathing in, I saw my father as a five year old boy. Breathing out, I saw the sweetness of his true self.

A few weeks later, my sister Terri called to say that suddenly he could no longer walk or swallow and that he was going into hospice,  She told me to hang on, she was going to put him on the phone. He can no longer talk, she said, but he can listen. Talk to him, she said.  So I did.  I talked. Then, with great difficulty and effort, he said, as slowly as you can possibly imagine, I……… Loooooooooove……… Youuuuu…..

The next day I flew to Phoenix and joined the rest of the family around his hospice bed, some 28 hours before he died.  He greeted me with a big smile. Mom said,

Play your ukulele for him Gayle.

So I did.  His hands no longer exactly found one another, but you could tell he was trying to clap. I was enough. At  the end, he was too.  Eight years later, guess what? Just because someone dies, it doesn’t mean your relationship is over.  Dad and I are still working it out.

ps.. I had to fight back tears for reason #3 at the gym this week. I happened to be working out on a machine in front of a TV, when Trump was addressing the UN.  I heard him say, “… if the [U.S.] is forced to defend itself or its allies, we will have no choice but to totally destroy North Korea.”   Whaaaaaattttt!!!!!!   Like the adolescent man-child boy he is, he named-called the North Korean leader Kim Jong Un, “Rocket Man” and claimed he is on a “suicide mission.”  I am so sad for our country and other countries.  What a mess we’ve created!

Over many decades, Thich Nhat Hanh guided countless meditations. Here’s one of them closely reminiscent of the one I heard that day so many years ago.

Guided meditation for Releasing Anger and Healing Relations with Our Parents.

2. Smiling to the five-year-old child, I breathe out.

4. Seeing the five-year-old child as a fragile and vulnerable, I breathe in.

5. Smiling with love to the five-year-old child, I breathe out.

7. Seeing my father as a five-year-old boy, I breathe in.

8. Smiling to my father as a five-year-old boy, I breathe out.

10. Seeing my five-year-old father as fragile and vulnerable, I breathe in.

11. Smiling with love and understanding to my father as a five-year-old boy, I breathe out.

12. Father, fragile and vulnerable / Smiling with love and understanding

13. Seeing my mother as a five-year-old girl, I breathe in.

14. Smiling to my mother as a five-year-old girl, I breathe out.

16. Seeing my five-year-old mother as fragile and vulnerable, I breathe in.

17. Smiling with love and understanding to my mother as a five-year-old girl, I breathe out.

18. Mother, fragile and vulnerable / Smiling with love and understanding

19. Seeing my father suffering as a child, I breathe in.

20. Seeing my mother suffering as a child, I breathe out.

28. Understanding the difficulties that my father in me has, I breathe in.

29. Determined to work for the release of both my father and me, I breathe out.

30. Difficulties of father in me / Releasing father and me

31. Understanding the difficulties that my mother in me has, I breathe in.

32. Determined to work for the release of both my mother and me, I breathe out.

33. Difficulties of mother in me / Releasing mother and me