This came up in a family discussion the other day when I said the latest caregiver is sweet and kind, but she doesn’t really engage with Mom.  So, what’s the difference between care-giving and engagement?  I was asked.  There seemed to be an implication that Mom was expecting too much, was being difficult, and what was this elusive engagement requirement anyway?

The question caught me off guard as the answer seemed so obvious to me that I didn’t even have words for it — the philosophy of engagement.  I felt irritated and annoyed and returned the question with one of my own.

Have you ever had to be entirely dependent on Anyone for Every Thing in Your Life for Any Length of Time?

I wasn’t surprised that No was the answer.

In two months, Mom has gone from being an entirely independent and highly functioning 97 year old to an entirely dependent and modestly (at best) functioning 98 year old.  Her brain still works gloriously at times, most of the time, when it isn’t challenged by short term memory loss (which it now suddenly is) or moments of confusion, or simply exhaustion, drowsiness, fatigue, and another nap.

Mom at the dining room table with strawberry yogurt and in her favorite green chair.

When I arrived in Phoenix for this last visit a week ago, she was still enjoying playing banana-gram, a game where you spell out words with little scrabble-like polished wood squares with bold black capital letters, but no board, and for us, no rules. We still intersect our words with each other’s words. While we don’t keep score and don’t care who wins or loses, there is still some challenge and fun in coming up with your own best word.  Over the week I’ve observed how Mom went from being able to take her turn and put down a word to two nights ago when she looked repeatedly at her letters and was unable to determine which letters she could line up to make a word. It wasn’t that she had a bad group of letters; there were obvious words to be made.  I could feel her frustration, maybe even her panic as I, her friend, Bernie, and her caregiver, Karla watched and waited, and waited some more. Eventually one or another of us reached over to help her out. Besides the word creation issue, her fingers had trouble handling the small squares, which was also a change from earlier in the week.  The game we played was obviously not competitive, but still, a person wants to be able to spell her own word(s), even if it’s not a fancy five letter one, so when I talk of having to be dependent on someone else for everything — toileting, dressing, eating, grooming, standing up, sitting down, whether or not there is going to be a blanket made available if you’re cold, a glass of water if you’re thirsty, the phone if it’s ringing for you and not quite in reach, the ability to spell your own simple word — I mean… Everything!

This is where the question of care-giving vs engagement becomes interesting.

We can have all the pieces of paper in the world filled out with advanced directives about avoiding (or if you’d want it — getting) invasive procedures in the face of dying — IVs, CPR, ventilators, etc — but really what is MOST important in situations like that of my Mom — the long, slow decline and loss of ability to remain independent (many of us will face) — as we move slowly toward dying and death — is the day to day, moreover  the moment to moment connections we experience (or don’t) with others.  When so much has been taken away, being allowed to make your own decisions becomes more meaningful than ever. How people allow and support those decisions in a caring way and the moment to moment living of it — that is engagement.

In terms of care-giving, for anyone who has been a nurse (like myself) or a patient (like myself) you have probably had the opportunity to witness care delivered in a way that was totally dis-engaged. The doctor with a terrible bedside manner, the nurse whose hands are doing something to you, but whose mind is a million miles away.  A person who delivers care, but who clearly doesn’t care, isn’t engaged.

Kind of like Melania and her jacket, arriving at the children’s jails with the message emblazoned on her back.  Usually it’s not spelled out so blatantly, but one still gets the message — I really don’t care. 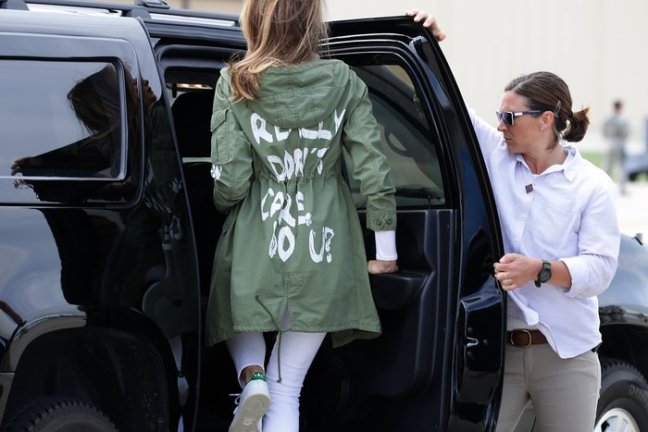 JOINT BASE ANDREWS, MD – JUNE 21: U.S. first lady Melania Trump (C) climbs back into her motorcade after traveling to Texas to visit facilities that house and care for children taken from their parents at the U.S.-Mexico border June 21, 2018 at Joint Base Andrews, Maryland. The first lady is traveling to Texas to see first hand the condition and treatment that children taken from their families at the border were receiving from the federal government. Following public outcry and criticism from members of his own party, President Donald Trump signed an executive order Wednesday to stop the separation of migrant children from their families, a practice the administration employed to deter illegal immigration at the U.S.-Mexico border. (Photo by Chip Somodevilla/Getty Images)

I couldn’t resist showing the second version of this jacket — the personal & the political.  Like life.

Even if you haven’t had the misfortune to be a patient, or say, a child abducted from its parents and placed in a so-called shelter for care, or the parent of such a child, you have probably experienced versions of services delivered without care, without engagement.  Perhaps when a waiter delivers food without saying a word, without returning to your table to see if everything is ok.  Perhaps by some service representative on the phone from AT&T or Comcast.  Perhaps neighbors who are decent in terms of keeping their front yard clean or nodding a hello as they walk by, but do they ever engage, do they give any expression of caring?  There are  myriad opportunities throughout any of our days to create the threads of connection.  Sometimes the expressions of caring are simply not there. Non-engagement.  Sometimes the expressions are the opposite of caring, or hostile (what tragically many of those abducted children and their parents are going through). Someone who is actively rude, argumentative, unkind, or punitive. In that case there is engagement, but not the kind any of us wants.

If a caregiver is working for Mom twelve hours a day from 7:30am to 7:30pm, and the actual care-giving part — the toileting, grooming, dressing, feeding, helping up and down, walking alongside of, giving medicine — takes, oh, let’s say 3-4 hours, and say Mom is sleeping another 2-3 of those hours, what happens during the other 5-7 hours?  What kind of engagement?  Conversation? Laughter? Concern? Looking at pictures together? Sharing stories of each other’s lives? Offering a foot massage?

It’s hard enough for Mom to accept the fact that she can no longer do all the very basic things for herself.  She still loves life and has a strong will to live, and, at the same time, she is aware that her body is dying.  She expresses that she is frustrated that it is taking a long time.  She’s not in a hurry to leave; she would happily stay if she could have even half of her ninety-seven year old body’s abilities back. Ninety-eight — which she turned on May 4th — has just really sucked.  But the world of difference — even now — even in this trying condition — is that when someone really engages with her, allows her to be her fullest available self, doesn’t argue with her or fret, talks, listens, engages! Mom is still able to settle back, be totally present, laugh, and enjoy the moment.

Engagement is (almost) everything! 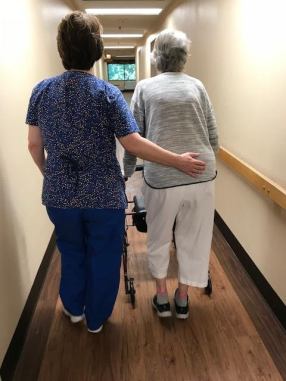 Stephanie & mom, on their daily stroll…

This blog post is dedicated to Stephanie, her 4 day a week caregiver, who has been the very definition of engagement, in the best possible ways.

and… a poem by Rumi

Today, like every other day, we wake up empty

and frightened.  Don’t open the door to the study

and begin reading.  Take down a musical instrument.

Let the beauty we love be what we do.

There are hundreds of ways to kneel and kiss the ground.

8 thoughts on “Mom Update: the philosophy of engagement”